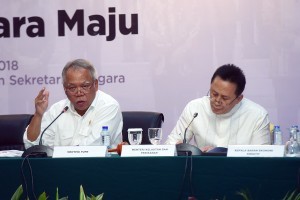 Minister of Public Works and Public Housing Basuki Hadimuljono, accompanied by chairman of Berkraf, holds a press conference on the 4-Year Report of the Jokowi-Jusuf Kalla Administration, in Jakarta, Tuesday (23/10) Photo by: Agung, Public Relations Division of Cabinet Secretariat.

The Indonesian Government has been accelerating infrastructure development since 2015, but there is still room for improvement since the Government aims to join the top 40 in global competitiveness index, according to Minister of Public Works and Public Housing Basuki Hadimuljono.

“In fact, our competitiveness has only raised 2 levels, from 47 to 45. We want to enter the top 40,” Basuki said during a press conference on the 4-Year Report of the Jokowi-Jusuf Kalla Administration, in Jakarta, Tuesday (23/10).

The Minister said that infrastructure development does not only aim to support economic growth but also to increase competitiveness. He added that as of 2018, Ministry of Public House and Public Housing has built 3,432 km of national roads and 941 km toll road, including Pejaten-Pemalang, Sragen-Ngawi toll road that will be operated soon.

“There is a new dam in Aceh without irrigation. Now we have built the irrigation that can be used for 18,000 hectares agriculture. The dam was completed in 2004 and we started the construction of irrigation in 2016.” Basuki said.

The Minister went on to say that for the equitable distribution of development, the Government has built 1,692 km road along the border of Kalimantan and the remaining 200 km will be constructed in 2018-2019, while 1762 km roads in the border of East Nusa Tenggara and 909 km in the border of Papua have been finished. (FID/DND/UN/AGG/ES) (RI/EP/Naster)