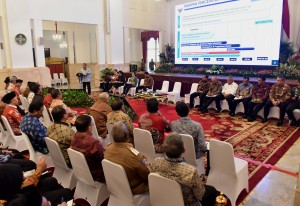 The RKP is done at the State Palace, Jakarta, Tuesday (24/10). (Photo by: Public Relations/Rahmat)

The Government on Tuesday (24/10) held a Government Working Meeting (RKP), which was attended by regional heads including Governors, Regents, and Mayors from all over Indonesia.

At least 576 regional heads were scheduled to attend the meeting, which was held at the State Palace, Jakarta, Tuesday (24/10).

During the meeting, the regional leaders would listen to direct briefings from President Joko Jokowi Widodo.

Entering the fourth year, the administration of President Joko Widodo and Vice President Jusuf Kalla continues to push for the acceleration and equality of development all over Indonesia.The development is no longer Java oriented but Indonesia oriented. Infrastructure development is expected to boost economic growth and address gaps.

In addition, the Government also continues to push for a just economic equityfor the whole Indonesian people.

Furthermore, efforts to improve quality of life continue to be made through social assistance for the people in various sectors, includingin education sector, health sector, and other social security programs.Village funds also given to stimulate and strengthenempowerment programs in the villages.

The RKP which is held every year is the Governments effort to create consolidation among regional heads to make the development programs a success.

Last year, the Government also held a coordinating meeting by Governors from all over Indonesia.  The coordinating meeting was held to follow up reports from the people on various issues and to acceleratethe Governments programs. During the meeting, President Jokowi gave briefings on eradication of illegal levies, simplifying of permits, land acquisition, and investment in tourism sector. (RMI/RAH/ES) (EP/YM/Naster)