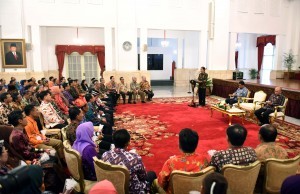 President Jokowi delivers his remarks at the conferment ceremony of the 2016 AdhikaryaPangan Nusantara (APN) Awards at the State Palace, Wednesday (30/11). (Photo by: Public Relations Division/Jay)

Indonesia has many untapped opportunitiesto become a major food producer in the world and can compete with other countries thanks to the countrys natural resources.

Therefore, PresidentJokowihas called on the Central Government, regional governments, governors, regents, mayors,village heads, instructors, researchers, and farmers to work together to realize it.

If we have a strong will, determination, and resolve, we can realize them all, the President said in his remarks at the conferment ceremony of the2016 AdhikaryaPangan Nusantara (APN) Award (an awards given for those who have made achievements in food sector) at the State Palace, Jakarta, Wednesday (30/11).

President Jokowi also stressed that he would continue monitoring the use ofthe Village Funds so it can be used to increasefood production, be it to build irrigation system or to build retention basins.

Last year, the Village Funds we distributed amounted to Rp20.5 trillion for villages all over Indonesia. This year, it is Rp47 trillion. Next year, it will be Rp60 trillion and in 2018, I have instructed related ministersto raise it into Rp120 trillion, the President said.

President Jokowi added that he has also instructed Minister of Agriculture, Minister of Village, Development of UnderdevelopedRegions and Transmigration,as well asMinister of Public Works and Public Housingto start concentrating on building as many retention basins as possible starting next year because water is the key.

If water is available, farmers can produce commodities all year long and wont depend on the rain, the President said.

The President added that Indonesia has abundant hydro resources that must be well-managed in order tobring benefits and will not cause floods instead. It can be done, the President added, by way of providing sluices, raising land level, or providing water pumps.

The Government has distributed 40,000 water pumpsto the people, the President said.

On that occasion, President Jokowi also thanked the award recipients for their rolesto promote Indonesias food sector and hopes that they can inspire othersto keep working and be productive.

In the meantime, Minister of Agriculture Amran Sulaiman reported thatIndonesias food production has increased in 2016, especially rice, corn, chili, andonion.This year, thanks to our collective efforts and in accordance with the instruction of the President, we no longer import rice, onion, and chili in 2016. In the meantime, corn import has also dropped by 60 percent until now, Amran said.