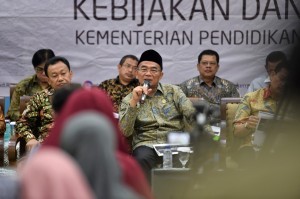 Under this regulation, the Government seeks to improve the school zoning system that has been developed.

For the record, one of the points amended in the Ministrys Regulation Number 51 Year 2018 is the use of Relief Letter (SKTM) for students from disadvantaged families proven by the intended family participation in a social security program provided by the Government/local governments. The 12-year compulsory education program also is implemented by zoning system, he said.

The Minister also stated that education zoning system is one of the Governments attempts to improve education quality. Other than the zoning system, he added, the Government will also carry out the distribution of teachers, teacher quality, as well as facilities and infrastructure improvement.

With the education zoning system, Muhadjir expressed hopes that schools and educational institutions will actively register school-age children in their respective zones. Therefore, the Ministry seeks to enhance cooperation with Ministry of Home Affairs, especially with Directorate General of Population and Civil Registry, he said.

The Minister also urges local governments to immediately make PPDB guidelines stipulated by local government regulation based on Minister of Education and Culture Regulation Number 51 of 2018 and to establish zoning in their respective regions, no later than one month before the implementation of PPDB scheduled to begin in May this year. (Humas Kemendikbud/ES)