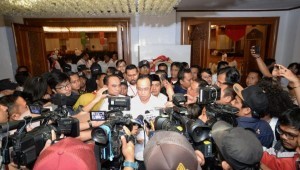 According to him, this is a major step to boost economic growth and to provide ease for the people.

We are carrying out various infrastructure developments, not only in cities but also in remote areas. (In addition), President Joko Jokowi Widodo has called for the dissemination of those infrastructure developments so that the people can enjoy the benefits. We hope that the developments can boost the economy, create better inter-regional relations, and in the end, Indonesia can be united through good connectivity, Budi told reporters in Jakarta, Saturday (9/15).

The Minister added that to realize the connectivity, the Government is building various transportation infrastructures such as air tolls and airports in many regions. We are, for example, currently building an air toll supported by several airports in remote areas, such as air toll in Papua airports in Oksibil and Tanah Merah, Haliwen airports in East Nusa Tenggara (NTT) province and Miangas airport in Miangas island (North Sulawesi province). We hope these infrastructure developments can raise our pride as a nation as well as our nationality, Budi said.

In addition to air tolls, Budi added that Ministry of Transportation is also building sea tolls and ports in various regions with the aim of reducing price disparity between the western and the eastern part of the country. We are building sea tolls in Dobo, Saumlaki and Sebatik Ports, as well as providing pioneer transportations to boost economic growth in eastern Indonesia, Budi said.

The Minister also mentioned the development of sea transportation, including the operation of long distance ferries and short sea shipping programs to facilitate the people in their activities and fulfill their needs.

We are developing long distance ferries that can reduce the burden in roads along the north coast of Java island, reduce road accidents due to fatigue suffered by drivers and cut shipping costs. The sea shipping program can also slash travel time, which results in efficiency in road maintenance costs, fuel vehicles and many more, Budi concluded.  (Bureau of Communication and Public Information Ministry of Transportation / EN) (STU/EP/Naster)