Govt is Optimistic of National Economy in 2019 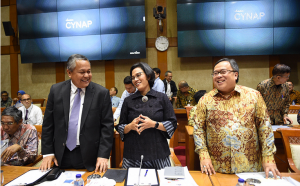 Although the Government has affirmed its optimism in facing economic condition in 2019, they still reminded people the importance to remain vigilance amid the turmoil of a dynamic global situation.

The Governments optimism reflected from the 2018 State Budget which showed sound performance amid the global economic condition that is dynamic and can change rapidly, Minister of Finance Sri Mulyani Indrawati said in a working meeting with Commission XI of the House of Representatives, in Jakarta, Wednesday (16/1).

Thus, vigilance remains high but at the same time we have optimism that is based on the 2018 performance which has created strong momentum, the Minister firmly said.

The Minister went on to say that the Government will keep the momentum of the 2018 State Budget realization going by implementing several strategic policies, among others; optimizing state revenues while maintaining an investment climate, improving the quality of state expenditure, implementing pro-people development policies such as reducing poverty, welfare distribution, and empowering State-owned Enterprises (SoEs).

God willing, Insha Allah, our economic performance is projected to improve compare to that in 2018 with a higher economic growth and maintained macroeconomic stability. (Finance Ministry PR Division)