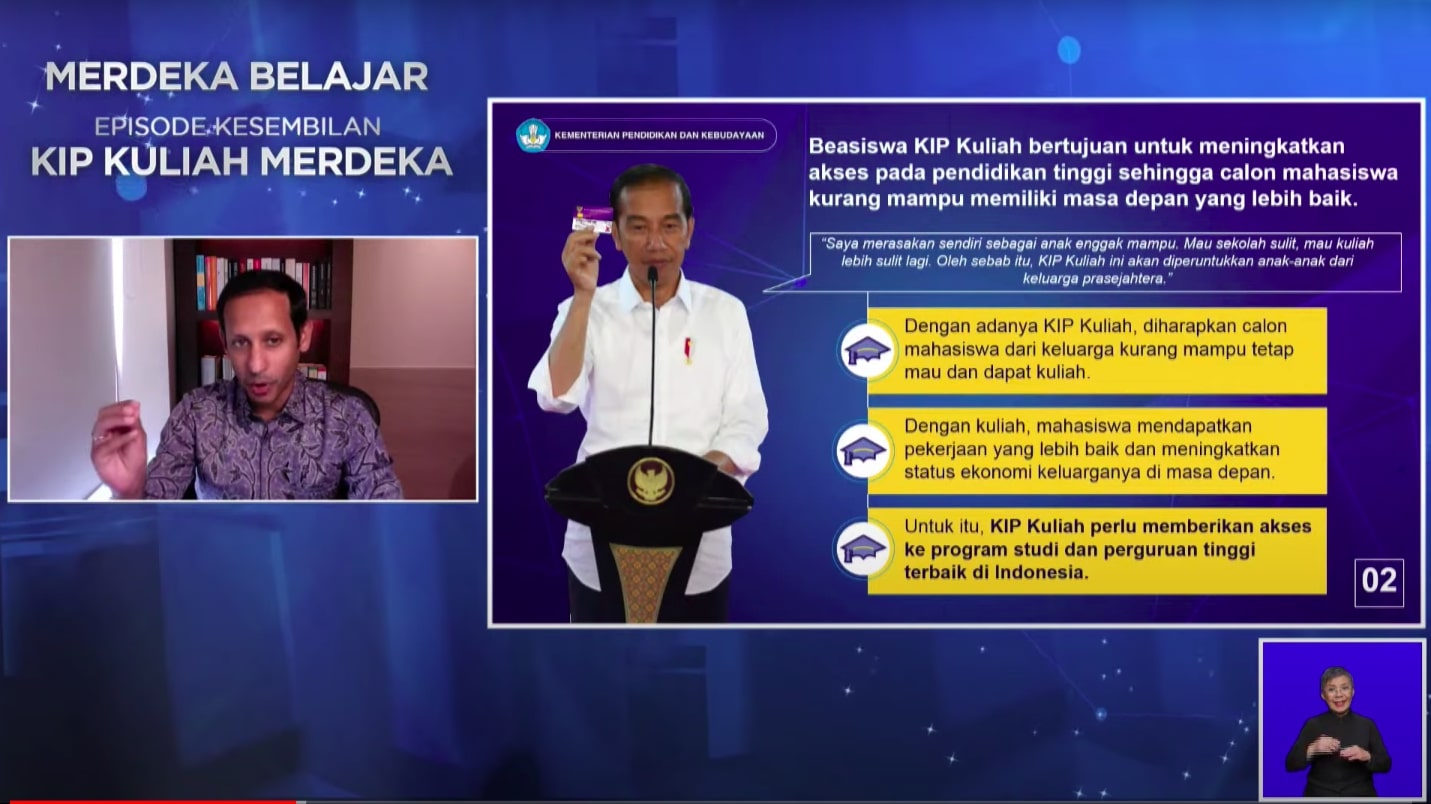 Ministry of Education and Culture has launched the ninth edition of Merdeka Belajar (freedom to learn) under Smart Indonesia Card-College (KIP Kuliah) program. The scholarship given through the KIP Kuliah is aimed at providing access to higher education to underprivileged people in order to realize educational equality and quality education. Therefore, President Joko “Jokowi” Widodo’s vision of developing superior Indonesian human resources can be materialized.

“This policy will reflect social justice and higher social mobility so that high-achieving children from underprivileged families can achieve their highest dreams,” Minister of Education and Culture Nadiem Anwar Makarim said during the virtual launch of the program, Friday (26/3).

“Ministry of Education and Culture has increased the amount of financial assistance for tuition fees and living expenses, higher than that of the previous figure. Thus, we hope that KIP Kuliah will set more prospective students free from financial constraints to achieve their dreams,” he said.

The Ministry has revised the KIP Kuliah scheme by providing higher tuition assistance and living expenses, which will be applied to new students who receive the KIP Kuliah for the 2021 academic year. The budget allocated for KIP Kuliah increases significantly from Rp 1.3 trillion in 2020 to Rp 2.5 trillion.

The KIP Kuliah will be provided to 200 thousand new students of state and private universities under the supervision of Ministry of Education and Culture.

For the record, the tuition assistance will be adjusted to the study program.

In the revised KIP Kuliah scheme, the living expenses for KIP Kuliah recipients in 2021 are adjusted to the regional price indices based on the results of the 2019 National Socio-Economic Survey.

In the meantime, Minister for Human Development and Culture Muhadjir Effendy said that the KIP program launched in 2014 has shown positive achievements marked by an increase in the average length of schooling.

Through the KIP Kuliah, the Government has provided more opportunities for young people from underprivileged backgrounds to improve their quality of life and break the chain of poverty.

“We welcome the breakthrough made by Ministry of Education and Culture in this KIP Kuliah program in terms of increased Single Tuition for Higher Education (UKT) and living expenses. I ask underprivileged vocational and high school students who have performed well academically to register for KIP Kuliah. Realize your dreams by pursuing further education,” Muhadjir said.

On that occasion, Minister of Education and Culture also invites high-achieving students from underprivileged families to take advantage of the KIP Kuliah program. There are several opportunities to register as KIP Kuliah recipients, including through the computer-based exam (UTBK) for the joint entrance test for state universities (SBMPTN).

“Any information and registration for the KIP Kuliah program for prospective students of 2021 can be accessed via kip-kuliah.kemdikbud.go.id,” Nadiem said.

The Minister further encouraged leaders of universities to disseminate this program to underprivileged students so that they have courage to apply to leading study programs at the best universities because tuition fee is no longer a problem. (PR of Ministry of Education and Culture) (RIF/MMB)