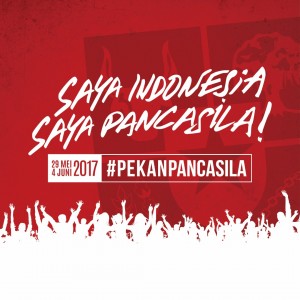 the logo of the Pancasila Week campaign

To commemorate the birth of Pancasila (the Five Principles, the Indonesian State Philoshopy), in which 1 June has been declared by President Joko Jokowi Widodo as a public holiday through Presidential Decree Number 24 of 2016, the Government will hold various activities during the Pancasila Week between 29 May 2017 until 4 June 2017.

This years Pancasila Birth Day Commemoration adopts the theme Saya Indonesia, Saya Pancasila (I am Indonesia, I am Pancasila)

Head of Press Media and Information Bureau of the Presidential Secretariat, Bey Machmudin, said that the Government has been cooperating with various stakeholders to disseminate the Pancasila Week campaign.

The cooperation, Bey added, include the airing of public service announcement ads on TV stations and theaters, talk shows and music programs in radio stations, publication and distribution of books, as well as other programs.

The commemoration of the Pancasila Day on 1 June 2017 will be centered at the front yard of the Pancasila Building at the office of the Ministry of Foreign Affairs on Jalan Pejambon, Central Jakarta, and President Joko Widodo will serve as the Inspector of the Ceremony, Bey said in his press statement on Friday (26/5).

In addition, Bey further said, flag-raising ceremonies would also be held in every government institutions office, both at the central and regional levels, as well as Indonesias embassies abroad.

Bey added that the Pancasila Week aims to strengthen and re-introduce basic values of and to attract the young generation for Pancasila so it is expected that all components of the nation can implement the values of Pancasila in the life of the country and the nation.

Bey also hopes that in addition to the dissemination of the logo and the theme, the hashtags #PekanPancasila #SayaPancasila #PancasilaReborn #KenalPancasila #PancasilaPunyaKita #PancasilaSatu #Pancasila2017 are expected to begin to be used in various social media platforms in order to make the Pancasila Week campaign a success. (BPMI Setpres/ES) (Naster/YM/EP)