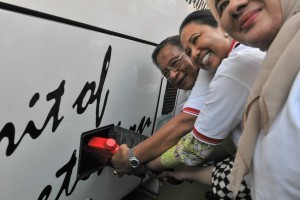 The launching of Biodiesel 20 at Ministry of Finance, Lapangan Banteng, Jakarta, Friday (31/8). (Photo by: Jay/Public Relations).

The Government officially launched the mandatory use of the 20 percent biodiesel blending policy or B20 which will be effective starting on Saturday (1/9) for all sectors.

The launching, took place at the field of Ministry of Finance, Lapangan Banteng, Jakarta, Friday (31/8), was marked by filling parked trucks and buses’ fuel tanks with B20 from a Pertaminas fuel truck.

The B20 now is not only used for public service obligation (PSO) transports but also includes the non-PSO, for example heavy equipments for industrial purposes, military equipments and vehicles. For the record, the implementation of B20 policy has been started since 2016 but it has not been thoroughly applied to all sectors.

Starting on Saturday (1/9), all sales of Solar fuel at gas stations will be replaced by Biodiesel 20 or B20, which is a mixture of Solar diesel fuel with 20 percent of biofuel made of palm oil.

On that occasion, Coordinating Minister for the Economy Darmin Nasution said in his remarks that the implementation of B20 is carried out to encourage exports and slow down imports in order to recover financing balance and to reduce current account deficit.

Based on the calculation of Ministry of Energy and Mineral Resources, if the policy is effective as of 1 September the country can save US$1.1 billion or Rp15.8 trillion, Darmin said.