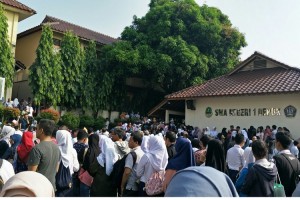 The Governors and Regents/Mayors are expected to make adjustments to the provisions of PPDB in accordance with the changes in the circular letter.

The adjustment was also made on the zoning channel. The channel was changed from a minimum of 90% to a minimum of 80% of the school capacity. Meanwhile, the channel of transferring student due to moving parents remained 5% at most.

“We issued the circular to help areas with PPDB problems. Meanwhile, for regions with no problems, they can just implement (the previous quota distribution),” Didik stated.

There are three channels available in this year new student admissions, namely the zoning channel, achievement channel, and the channel of transferring student due to moving parents/guardians.

The achievement channel is provided for outstanding students who live outside the zoning of the school. The acceptance of students through this channel is determined through the Standardized National School Final Examination (UASBN) or National Examination (UN), as well as achievements or awards in academic and non-academic fields at national, provincial and district/city levels.

In the meantime, the channel of transferring student due to moving parents/guardians is provided for prospective students who live outside the zoning of the school and have to transfer due to parental duties as evidenced by a letter of assignment from the parents’ agencies, institutions, offices, or companies.

“This year’s zoning-based PPDB is in the third year of implementation. (The implementation) is expected to accelerate the improvement of equity and quality in education,” said Didik, adding that he expected students with good achievements to go to their neighboring schools instead of a particular school. (Ministry of Education and Culture PR/ES)