Govt Not Repressive in Issuance of Perppu on Mass Organizations, President Jokowi Says 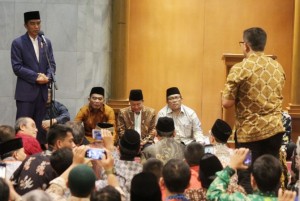 President Joko Jokowi Widodo dismissed the notion that the Government has been repressive by issuing a Government Regulation in lieu of Law (Perppu) on Mass Organization. According to the President, the issuance of the Perppu has been very democratic because there is still a possibility that it is not approved by the House of Representatives (DPR) or revoked by the Constitutional Court (MK).

This Perppu will be proposed to the DPR. It can be approved or not. There are still opportunities. As for legal mechanism, you can file a judicial review to the Constitutional Court. We have the mechanism anyway, the President said during a gathering with members of thePersatuan Islam (Persis) Muslim Group at PP Persis Bandung Mosque in Bandung, West Java, Tuesday (17/10).

The President added that a policy can be considered repressive if what the Government wants has to be implemented come what may; in fact, in the issuance of the Perppu, it is not like that.

President Jokowi also asserted that the Government is very open not only about this Perppubut also on other matters.

The President cited an example when the Government revoked 3,153 regional laws but some people filed a judicial review at MK and the Government finally lost the case.

After we lost the case, we accepted it. The regional laws are in force again. 3,153 regional laws were in effect again. That is the consequence of the legal mechanism. We have to respect it, the President said.

As for the Perppu on Mass Organization,the President added the Government would treat it the same and if the content is reviewed at MK, the Government will not hinder the process because this is the legal mechanism that Indonesia has.

Previously, President Jokowi said that the issuance of the Perppu has been studied for a long time by the Coordinating Ministry for Political, Legal, and Security Affairs, including through collection of data, videos, books, and many others.

From those data, we consider everything from security aspect, nationality aspect, and state law aspect. Our conclusion at that time is that we need a Perppu because without it, the handling of things related to the existence of the State would be complicated. Its not because of mass organizations themselves, the President said.

President Jokowi further said that he had discussion with mass organizations several times regarding this Perppu.

We gather those mass organizations organized by Coordinating Ministry for Political, Legal, and Security Affairs. I also asked for their inputs. It was a long journey. The issuance of the Perppu did not happen overnight, the President concluded. (EP/YM/Naster)