Govt Not to Spend State Budget on Additional Hajj Quota 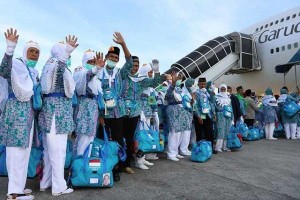 Indonesian Minister of Religious Affairs Lukman Hakim Saifuddin ensures that the cost for 10,000 additional hajj quota was not sourced from the State Budget (APBN).

It will come from the additional value of benefits of the hajj cost from the Hajj Fund Management Agency (BPKH) and efficiency of services cost in Saudi Arabia by Ministry of Religious Affairs.

According to Ministry of Finance, the State Budget can only be used to financing the operational activities of Hajj officers, Lukman said during a Working Meeting of the House of Representatives (DPR) Commission VIII on Hajj Pilgrimage Travel Fees (BPIH) Additional Quota in Jakarta, Thursday (16/5).

In a meeting on 23 April 2019, the Government and Commission VIII of the DPR had agreed to allocate additional budget of Rp353,7 billion which Rp183.7 billion out of it previously planned to be sourced from Budget Section-State General Treasurer (BA-BUN) of the State Budget. However, this plan has to be canceled since it is regulated that the State Budget can only be used for hajj pilgrims or officers-related matters.

According to Lukman, both the BPKH and the Ministry will provide Rp100 billion and Rp50 billion, respectively. The Rp50 billion provided by the Ministry comes from accommodation cost efficiency. So, the remaining shortfall is Rp33.7 billion, he said. The Ministry will also carry out the budget rationalization to cover the lack of funds, such as, first, adjustment of the amount of flight groups for 10 thousand pilgrims; second, elimination of safeguarding fees; and third, adjustment of the unit cost of manasik (rituals of hajj in brief) held at Religious Affairs Offices (KUA).

With this rationalization, the budget needed for the 10 thousand additional quota decreases from Rp353,7 billion to Rp319 billion. This amount can be covered by the benefits received by the BPKH and additional funds from accommodation cost efficiency.

On the occasion, Head of the Commission VIII Ali Taher appreciated the measures taken by the Government. Despite several adjustments that have to be made, Commission VIII encourages Ministry of Religious Affairs to maintain the quality of hajj services, he concluded. (Humas Kemenag/ES)