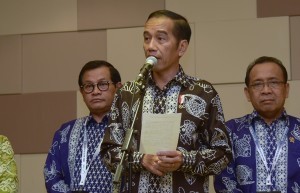 The Government has announced it is their best to search and evacuate the victims of Lion Air JT 610 aircraft crash.

We continue to pray and hope the victims will be found soon, the President Joko Jokowi Widodo said in his press conference at Bali Nusa Dua Convention Center (BNDCC), Badung Regency, Bali, Monday (29/10).

President Jokowi added that he shared the deep sadness of the relatives of victims; yet expressed hope that relatives will remain calm and patiently wait for the work of the rescue team.

We are still focusing on the search and rescue of victims. Please pray and support us, President Jokowi said.

As previously reported, Boeing 737-8 Max Lion Air flight JT 610 departing from Soekarno Hatta Airport, Banten, to Depati Amir Airport in Pangkal Pinang, Bangka Belitung, lost contact with authorities on Monday (29/10) at 06:33 a.m. West Indonesian Time. To date, he Basarnas has found the debris of the Lion Air JT 610 flight in the waters north of Karawang, West Java, with a depth of 30-35 meters.  (DNS/OJI/ES)