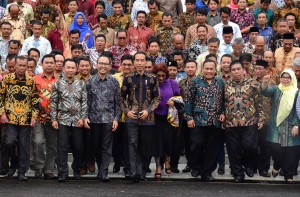 “Please use the loan and dont forget to pay the installment, President Jokowi said during a meeting with 300 Indonesian fishermen at the State Palace, Jakarta, Tuesday (22/1). The fishermen attending the event were fish cultivators, fish processors, fish traders, fishing net makers, and many others.

President Jokowi added that loan interest rate from fishermen micro bank is very competitive, only 3% (per annum). The President also reminded the fishermen to spend their money wisely and not use the money for nonproductive assets.

The President went on to say that the Government will expand the micro banks. The loan, according to him, can be used for fishing industries, fish processors, and fish traders.

In the meantime, President Jokowi said that he has instructed Minister of Marine Affairs and Fisheries Susi Pudjiastuti to expand insurance for fishermen.

“Fisherman is a high-risk job. Moreover, the weather is unpredictable nowadays,” the President said.

President Jokowi also said that the Government has sunk 488 illegal fishing vessels and expressed hope that the policy will increase fish production.

“The data shows that the fish production has increased, but it should increase more because we have significantly reduced the illegal vessels on our ocean, the President concluded.

Also present during the event were, among others, Presidential Chief of Staff Moeldoko, Minister of Marine Affairs and Fisheries Susi Pudjiastuti, and Coordinator of Special Staff to the President Teten Masduki. (FID/RAH/ES)