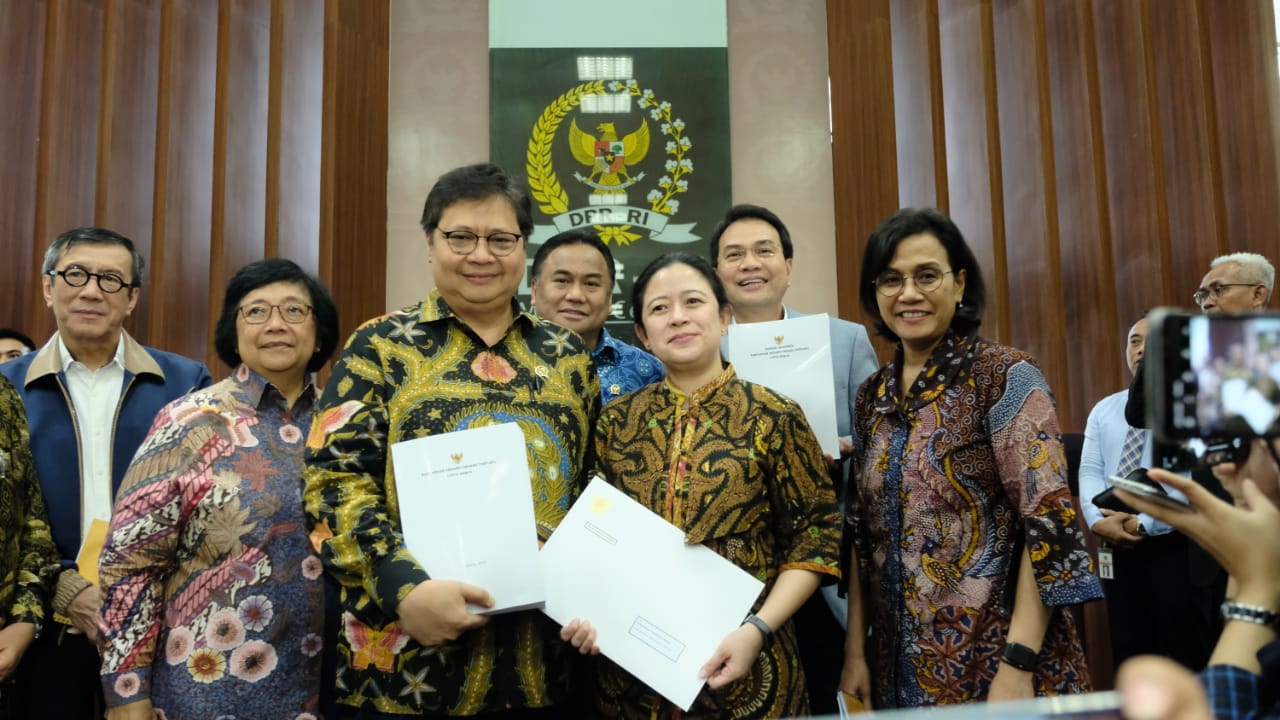 Coordinating Minister for Economic Affairs hands over Omnibus Bill on Job Creation to Speaker of the House of Representatives in the DPR/MPR RI Building, Jakarta, Wednesday (12/2).

The Government has officially submitted a Presidential Letter, Academic Analysis, and Draft Bill on Job Creation to the House of Representatives (DPR), on Wednesday (12/2), at Nusantara III Building, DPR Complex in Senayan, Jakarta.

The Omnibus draft bill was received by Speaker of the House of Representatives Puan Maharani, Deputy Speakers Rahmat Gobel and Azis Syamsuddin.

Coordinating Minister for Economic Affairs Airlangga Hartarto unveiled the reason why submission of the draft bill took time, that is, because of adjusting the time between the Government and the House.

“Everything is completed. The Bill has been submitted to the House to be processed in accordance with existing mechanism,” Airlangga said.

The Government and lawmakers will be involved in the deliberation of Omnibus Bill, and the Bill will be disseminated to all regions in Indonesia, Airlangga added.

“It is hoped that all people will know what will be discussed, the decisions that will be made and its impact on the national economy. The Bill purely aims to create job amid global uncertainty and coronavirus outbreak by transforming the country’s economy, which is entirely contained in this Omnibus Bill on Job Creation,” Airlangga said.

According to Airlangga, the official draft bill is only submitted to the House, so there should be no further speculation regarding the contents of the articles.

“No other version [of the Omnibus Bill),” Airlangga said, adding that the draft bill will be deliberated at meetings in the House and will involve seven commissions.

Meanwhile, Speaker of the House of Representatives Puan Maharani explained that Omnibus Bill on Job Creation comprises 15 Chapters and 174 Articles, using the Omnibus Law method, of which 79 prevailing Laws are amended.

Puan also admitted that the House just received the draft, yet did not know its full contents. “As many as 11 clusters will be deliberated and seven commissions will get involved. We will adhere to mechanisms in the House through the House Legislative Body or Special Committee,” Puan said.

Puan also reminded all not to speculate about the contents of the omnibus bill given that it is not deliberated yet.

“Previously, Minister of Finance had sent Taxation draft bill to be deliberated in the House’s Commission XI. However, this has not been a final decision, because it will still be deliberated at the level of leadership meeting of all factions of the House,” Puan said.