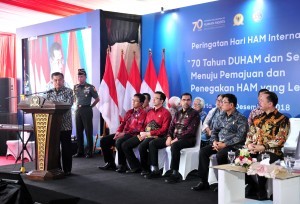 President Jusuf Kalla delivers remarks at the commemoration of the 2018 International Human Rights Day, at the Commission on Human Rights headquarters in Central Jakarta, Tuesday (11/12). (Photo by: Jay/PR Division)

Not only civilians but also government officials became victims of human right violations, just like what happened in Nduga District, Papua recently, according to Vice President Jusuf Kalla.

We must understand that human rights violations are not always committed by the Government. Civilians can also violate human rights, for example taking others live without reasons, as happened to workers in Papua, the Vice President said in his remarks at the commemoration of the 2018 International Human Rights Day, at the Commission on Human Rights headquarters in Central Jakarta, on Tuesday (11/12).

Kalla also considered the killing of a number of workers in Nduga District who were working on the Governments infrastructure development project is a severe law violation. Therefore, the Vice President expressed hopes that Commission on Human Rights can be fair in resolving that issues so it will show the public that the Government is not the one who is always accused committing the violation but also become the victims.

We must understand it to be able to respect each others rights, Kalla said, adding that the Government established Commission on Human Rights with the intention to encourage all people to respect human rights.

Regarding past human rights violations, the Vice President said that uncovering cases that happened 20 to 30 years ago is not easy and it does not happen in Indonesia only. According to him, even the United States to date cannot determine yet the perpetrator behind Kennedy assassination. What’s missing from the FBI’s quality that they cant uncover the one who killed Kennedy? he said.

According to the Vice President, the Government always strives to resolve the cases albeit not an easy task. Therefore, Commission on Human Rights plays strategic role to cooperate with the Government in safeguarding human rights, he said.

In the other part of his remarks, Kalla stressed that Indonesia plays a vital role in safeguarding human rights since the convening of Asia-Africa Conference in Bandung in 1955 that raised awareness to fight against colonialism, both for Asian and African countries. We cannot deny that after the conference, Indonesia played an important role for Asian and African countries in enlightening them about their human rights, he said.

Also joining Vice President Jusuf Kalla in the event were Presidential Chief of Staff Moeldoko and Chairperson of the National Commission of Human Rights of Indonesia Ahmad Taufan Damanik. (RAF/JAY/ES)