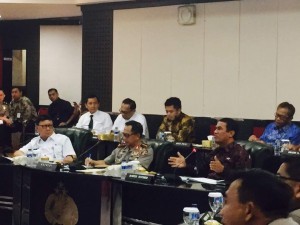 Minister of Agriculture Andi Amran Sulaiman delivers a press statement on food supplies ahead of Ramadhan and Eid al-Fitr on Wednesday (3/5), at the Headquarters of Polri, Jakarta

Minister of Agriculture Andi Amran Sulaiman, Minister of Trade Enggartiasto Lukita, Minister of Home Affairs Tjahyo Kumolo, and Chief of the Indonesian National Police (Polri) General Tito Karnavian ensured that food supplies would be able to meet the needs of the people ahead of the fasting month of Ramadhan and Eid al-Fitr this year.

Minister Amran said that there are 40,000 tons of beef in stock at the State Logistics Agency (Bulog), while the usual demand during Ramadhan is only 30,000 tons.

In the near future, the Government plans to add stock to 50,000 tons, the Minister said. The current amount of beef in stock is more than enough to meet the needs. The maximum price of beef will be at Rp80,000 per kg, some of them are sold at Rp70,000 to Rp75,000 per kg. The point is that the price should not be above Rp80,000 per kg, Amran said in a teleconference with all Regional Police Chiefs in Indonesia on Wednesday (3/5) at the Headquarters of Polri, Jakarta.

Moreover, there is 1.9 million metric tons of rice in stock that would be enough for the next eight months, the Minister added. We have agreed (to synergize). Bulog now has warehouses with 1,000 tons of storage capacity. Ministry of Agriculture has also stockpiled 2,000 tons of shallots and 1,000 tons of garlic. The Ministry prepared the staple food, while Bulog bought the warehouses that will be prepared by the Ministry of Trade. This is our synergy to face high demand on food ahead of and after Ramadhan, Amran said.

Also on that occasion, Minister of Trade Enggartiasto asserted that there is no reason for the rise in rice price ahead of and until Eid al-Fitr because rice warehouse in Jakarta is filled with 400,000 tons of rice. In addition to that, the Minister added, officials in Central Java and East Java have also rent warehouses.

Sugar, regardless of its brands, will be sold at Rp12,500 per kg. Bulog sells it at Rp11,250 per kg, and it will be sold by the distributors at Rp11,950 per kg. The price of sugar is down today, but the price still ensures the profit of producers and small traders, Enggar added.

In the meantime, Chief of the Indonesian National Police (Polri) General Tito Karnavian said that President Joko Jokowi Widodo instructed all Governments institutions to ensure the supply of staple foods and maintain the stability of their prices ahead of Ramadhan and until Eid al-Fitr.

According to Tito, staple food supply and stability are significantly affected by food distribution chain and it is because of speculators who are toying with commodity prices.

According to the Presidents instruction, the stability of staple food prices ahead of Ramadhan and until Eid al-Fitr should be maintained and monitored. The current problem lies in the food distribution chain, and speculators who are toying with commodity prices also contributed to it. I instruct all Regional Police Chiefs in Indonesia to take actions as firmly as possible. We will cooperate with Ministry of Agriculture, Ministry of Trade, Ministry of Home Affairs, Bulog, and Business Competition Supervisory Commission (KPPU) and take several joint measures to maintain the stability of food prices, Tito firmly said,

Tito also said that Polri will immediately establish a Task Force on Food which is specifically in charge of monitoring and taking firm actions against speculators who hoard food stocks. In his point of view, unreasonable price hikes is caused by the speculators who want unfair advantage. (Humas Kementan/ES)(RA/EP/YM/Naster)