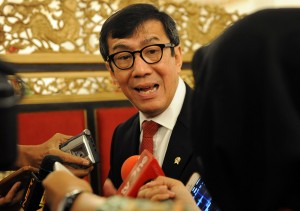 The Government is preparing a spesial prison for drug dealers convicts. The prison is to be located in Mount Sindur, Bogor, West Java.

Minister of Law and Human Rights Yasonna H. Laoly told the reporters that in the prison, inmates  would not be able to communicate with the people outside because lines of communication would be jammed.

Currently, a team from the Ministry of Law and Human Rights is checking the condition of the place. So, the team is going there to check, the Minister said to the reporters after attending a Limited Meeting at the Presidential Office, Jakarta, on Monday (21/9).

According to the Minister, his office will coordinate with the National Narcotics Agency (BNN) to move drug dealers convicts to the prison.

The place is being prepared, the Minister said.

Meanwhile, Yasonna also answered question from the reporters related to the convict Gayus Tambunan who got caught having lunch somewhere that at the time,Gayus was under guard by the Police and the Directorate General of Corrections.

There is a fixed procedure (protap) if a convict asks a permit to be out of jail due to a certain reason such as when his/her family member passes away, the convict must be accompanied by police officers and the officer of Directorate General of Corrections, he noted.

However, the Minister explained that the case is being investigated andif the guard is found guilty, he/she will be subject to sanctions. Yasonna also instructed to have the case evaluated immediately. (ES/Humas) (JS/EP/YM-Naster/Sy)