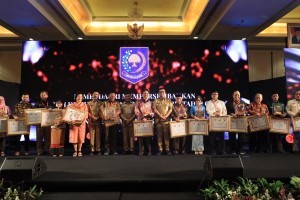 Minister of Home Affairs Tjahjo Kumolo takes pictures with representatives of the awardees in Jakarta, Tuesday (6/11). Photo by: Puspen Kemendagri

Minister of Home Affairs Tjahjo Kumolo handed over awards to a number of mass organizations that were considered to have succeeded in making a major contribution to the countrys development and safeguarding the sovereignty of Unitary State of the Republic of Indonesia.

The awarding ceremony was held in the Forum for Communication Coordination between the Central Government, Regional governments and Mass Organizations in Jakarta, Tuesday (6/11).

The organizations that get the awards are: 1. The Indonesian Child Cancer Foundation (YAKKI) in health Sector; 2. The Center for Forest Protection (COP) in environment sector; 3. The Indonesian Corruption Watch (ICW) in governance Sector; 4. The Muhammadiyah Disaster Management Center (MDMC) in disaster management sector; 5. The Alliance of Indigenous Peoples of the Archipelago (Aman) in cultural sector to; 6. The Female Head of Households (Pekka) in women’s empowerment sector; and 7. The Sultan Iskandar Muda College Foundation in education sector.

For the special category, Minister of Home Affairs conferred awards to the Anti-Narcotic Movement (Granat), the Youth of Pancasila, the Youth Wing of Nahdatul Ulama GP Ansor, and Youth of Muhammadiyah, while the best regional Bakesbangpol (Government Agency for National Unity and Politics) are from North Sulawesi Province, Semarang and Pasuruan.

In his remarks, Minister of Home Affairs Tjahjo Kumolo expressed his pride for mass organizations that have succeeded in improving the quality, competence and institutional capacity of the organization.

“Congratulations to all mass organizations and regional Governments that have contributed greatly to the development of our beloved nation,” Tjahjo said, adding that he also advised the mass organizations to support each other and continue to give their best to Indonesia.