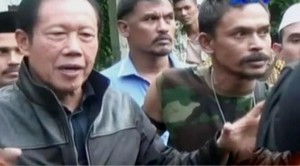 The Government will prioritize the settlement of human right violations of Din Minimi armed group in Aceh to be applied in a number of regions.

This refers to the provisions of the Presidential Decree Number 22 of 2005.

Soft approaches have always become priorities for this administration because we believe that soft approaches are always better than other (approaches), said Cabinet Secretary Pramono Anung to reporters after a plenary cabinet meeting at the State Palace, Jakarta, on Monday (4/11).

Nevertheless, Pramono stressed that if there are different views or there is an intention to form a country outside the Unitary State of the Republic of Indonesia (NKRI), the Government will take hard approaches.

Pramono also said that President Joko Jokowi Widodo also told Coordinating Minister for Political, Legal and Security Affairs that for matters related to human rights, the Government has to take approaches to all elements of the society so that human rights issues continue to become a priority to be resolved and they will not be burdens for the next generation.

In the meantime, regarding the amnesty asked by Din Minimi, Pramono said that President Jokowi has stressed that general amnesties must be immediately prepared to get approval from the House of Representatives (DPR) because the process is done through the consideration from the DPR.

As previously reported, an armed group led by Nurdin bin Ismail alias Din Minimi have surrendered to the Chief of the National Intelligent Agency (BIN) Sutiyoso in Ladang Baro Village, Julok Subdistrict, East Aceh, on Tuesday (30/12). Din Minimi and his group also submitted dozens of fire arms and requested for amnesty from the Government. (SLN/JAY/ES/EN)  (EP/YM/Naster)