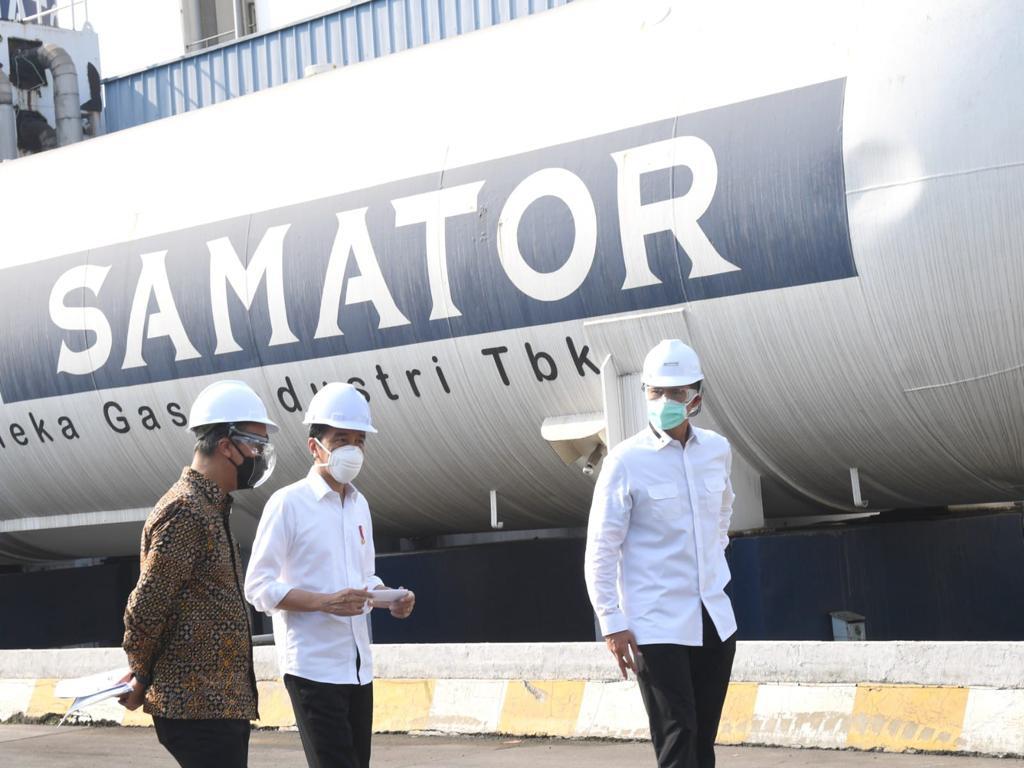 The Government has renewed its commitment to meet the rising demand for medical oxygen due to the recent surge in COVID-19 cases in the country.

“As we are all aware, the spike in COVID-19 cases continues unabated and has caused a sharp increase in national demand for medical oxygen for COVID-19 treatment, be it in hospitals or isolation centers. For that reason, the Government will strive to fulfill the demand,” President Joko “Jokowi” Widodo said in a press statement after inspecting industrial gas producer PT Aneka Gas Industri (Samator Group), in Cakung, East Jakarta, Friday (16/7).

According to the President, the Government has cooperated with domestic industries to ensure the supply of medical oxygen for the people.

“We have collaborated with domestic industries to secure the supply and distribution of medical oxygen so that the national oxygen demand can be met,” he said.

On that occasion, the Head of State also expressed his appreciation for the support from PT. Aneka Gas Industri (Samator Group) in supplying medical oxygen to the maximum.

“I highly appreciate the efforts made by PT Various Gas Industries, Samator Group for the hard work to meet the needs of medical oxygen by increasing its production capacity, so that it supports the national oxygen supply,” he said.

During the inspection, the President also visited the production tank up to the factory control room. The Pulogadung-based factory is one of three factories belonging to PT Aneka Gas Industri located in the western part of Java that produces oxygen, nitrogen, and argon.

In the meantime, President Director of PT Aneka Gas Industri Rachmat Harsono said that his party has taken necessary measures immediately once they learned the lack of oxygen supply amid the COVID-19 pandemic.

With the support from Ministry of Industry, Ministry of State-Owned Enterprises, and Ministry of Health, nearly 90 percent of oxygen products for industrial needs have been converted into medical use.

“We saw many people need oxygen support and we were moved. Therefore, we continuously ensure that medical oxygen and medical gas cylinders will be made available everywhere,” Rachmat said.

Echoing the same sentiment, General and Legal Director of PT Aneka Gas Industri Agus Purnomo said that if all oxygen producers in the country maximize their efforts to convert oxygen products for medical needs, the rising demand for oxygen could still be fulfilled.

“If we go all out to shift available oxygen products for medical use, the supply will still be sufficient. In one condition, everyone should try to make the most of production since the air separation plant (ASP) cannot be doubled in production, yet the operating model can be changed. That means we must maximize oxygen production. According to Minister of Health, the supply will still be secured with the demand of 2,200 tons per day,” he remarked. (FID/UN) (RIF/MUR)