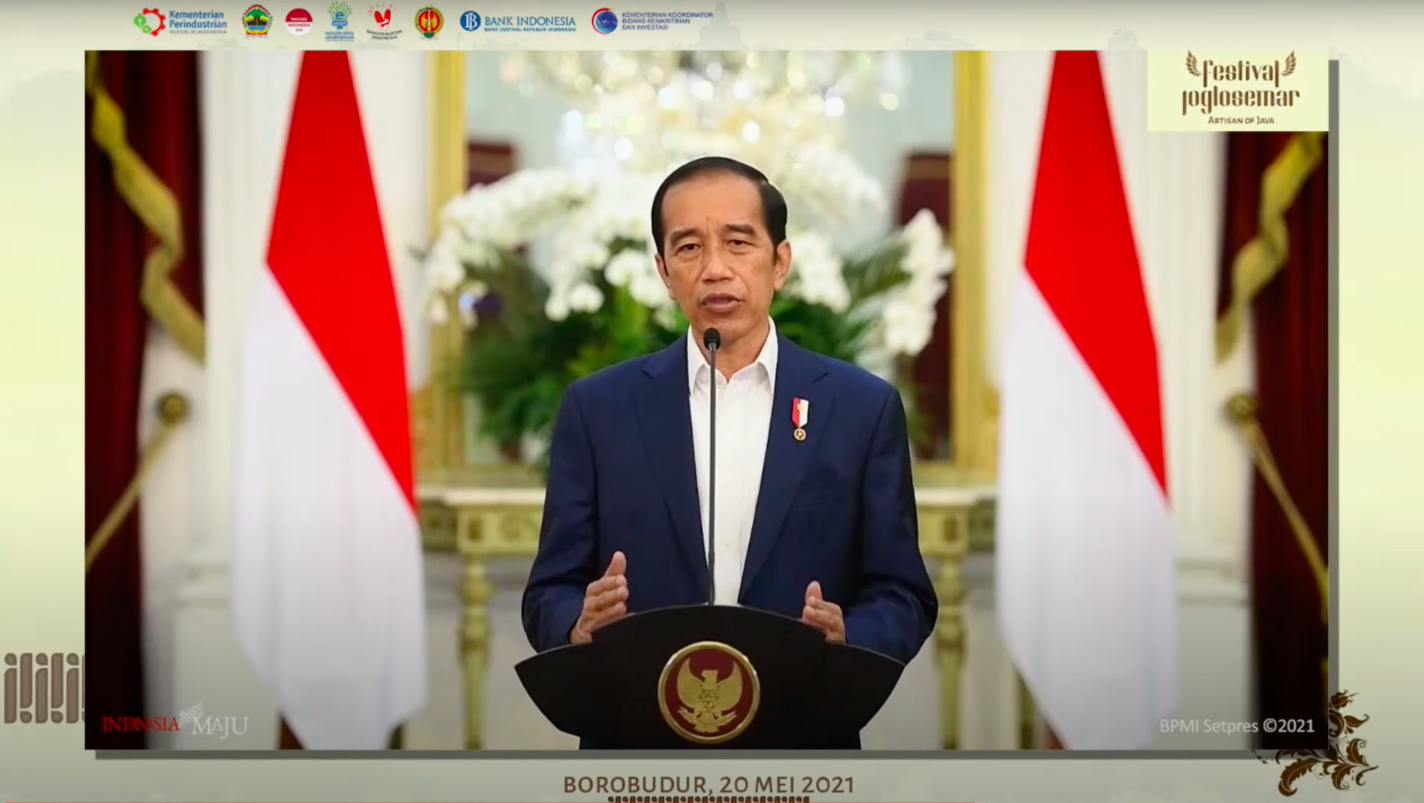 In commemoration of the National Awakening Day, the Government continues to promote the national campaign to buy Indonesian products (Gernas BBI) which aims to stimulate micro, small, and medium-sized enterprises (MSMEs), as well as small and medium industries to level up.

“We want to seize the moment of the National Awakening Day to accelerate the awakening of Indonesian products, the awakening of our MSMEs that are able to manufacture high-quality products, to dominate domestic market and enter the global market competition, and to level up,” President Joko “Jokowi” Widodo said in his introductory remarks at the opening of Joglosemar Festival: Artisan of Java, through video conference from the Bogor Presidential Palace, on Thursday (20/5).

President Jokowi asserted that the MSMEs are fundamental pillars that can stimulate the national economy. It is because the MSMEs have various products which businesses spread throughout the country, involve many locals, create new jobs, and absorb manpower.

According to the President, the Joglosemar Festival held during the peak event of Gernas BBI is expected to bring concrete results and significant progress to national MSMEs.

“We expect the number of MSMEs joining e-commerce can increase significantly. Thus, it will also bring positive impact to the economic flow in which the cash will circulate from the grassroots, to the peripheries and remote areas in the country in equitable and just manners,” he said.

For that reason, the Government is improving the business environment for the MSMEs. The Government has also issued Job Creation Law which provides ease of doing business for the MSMEs, simplifies complicated and overlapping regulations, and facilitates the MSMEs to open new businesses.

“Let me remind the cabinet and regional heads to ensure the implementation on the ground. It is really important to guard the implementation, so that the benefits can be felt by the MSMEs players,” he firmly said.

He went on to say that structural reforms adopted by the Government do not only address permitting issues, but also accesses to finance and market, as well as provision of assistance to the MSMEs.

“We have and will continue to offer easy access to finance, we also improve access to the market, provide assistance to the MSMEs, carry on improvement of branding, packaging, and marketing, as well as enhance protection to the MSMEs,” he stated.

On that occasion, President Jokowi called on all sides to be involved in the development of MSMEs by continue promoting and marketing the products, displaying the products at the first row of the stores’ window, and selling them at airports, rest areas, tourist attractions, and other strategic places.

He also expressed hope that there will be more opportunities for the MSMEs to promote their products to the public that will enhance their love and boost their pride to national products.

“The awakening of Indonesian products should not only persist during a festival, during the Joglosemar Festival, or in Joglosemar area, but revival of domestic products at the national market and global market, as well as the revival of MSMEs,” he said.

For the record, Joglosemar Festival: Artisan of Java which is organized by Ministry of Industry featured a number of artisans from Central Java and the Special Region of Yogyakarta. The Festival aims at increasing the number of small and medium industries joining digital marketing platform, establishing value creation, and increasing demand for Indonesian artisan products.

In the meantime, Coordinating Minister for Maritime Affairs and Investment Luhut Binsar Pandjaitan said that since the launching of BBI Gernas in May 2020 there are 5,714,631 MSMEs going digital.

He expressed his optimism that the Government’s target to assist 30 million MSMEs to go digital will be met in 2023 considering its ongoing efforts in supporting local artisans. (TGH /UN) (RAS/MMB)