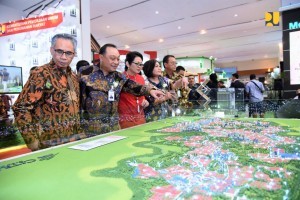 Furthermore, this program is a joint movement between the Central Government, regional governments, real estate developers and the community. Every year, the program is targeted to reach one million housing units.

These statements were enunciated by Director General of Housing Finance Lana Winayanti representing Minister of Public Works and Public Housing at the opening of the 2018 Indonesia Property Expo (IPEX) at A & B Hall of Jakarta Convention Center, Senayan, Jakarta, Saturday (22/9).

The Government makes it easy for low-income people to get a decent place to live through the provision of subsidies for down payment, low-interest on loans, and stimulants in providing infrastructure, facilities and public utilities. Breakthroughs and new ideas are needed to make the housing program successful for the people, Lana said.

Regarding the quality of housing, the Ministry also supervises subsidized housing quality that built by developers to meet decent living standards by creating Developer Registration Information System (Sireng). Currently, around 10,000 developers and 16 associations have registered.

President Director of PT. Bank Tabungan Negara (BTN) Maryono said that the exhibition will accelerate the realization of one million housing. New housing loans, both subsidized and non-subsidized loans, are projected to reach Rp5 trillion.