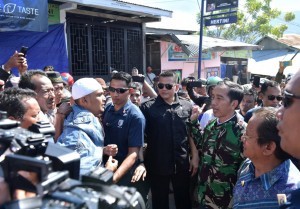 The Government attempts to resolve a number of problems in post-earthquake and tsunami relief efforts in Palu and Donggala, Central Sulawesi Province, to be completed within 1 or 2 days.

Meanwhile, related to the injured victims, according to the President, approximately 900 victims will be moved to Makassar to get treatment there and the rest are treated in hospitals in Palu.

Furthermore, for fuel supply, President Jokowi realized that the gas stations are filled with people who wanted to get fuel and he already instructed Minister of Energy and Mineral Resources to resupply the quake-affected areas with fuel as soon as possible. The fuel shortage, according to the President, is due to the difficulty of road access in Palu.

According to President Jokowi, there are also problems for food and water availability because many shops are not open yet. The President expressed his hope that this emergency response phase can be resolved as quickly as possible so the disasters affected areas can enter rehabilitation and reconstruction phases for public facilities such as hospitals, schools and bridges as well as for residents houses.