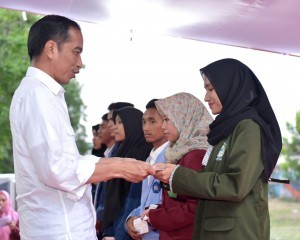 On that occasion, the President reminded the students that challenges ahead would be even tougher, as the world has entered the fourth industrial revolution with changes 3,000 times faster than those in the first one.

It means very rapid changes are inevitable. Weve just learned about Artificial Intelligence, and then there is the Internet of Things, Cryptocurrency, virtual reality, and Bitcoin. New things will continue to come, the President said, adding that the students should prepare themselves to face this fierce global competition.

However, the President expressed belief that with their skills and capabilities, the students will be able to compete in the competition and become the winners. The President also expressed hope that the students can continue their studies until they graduate.

Do not let the earthquake prevent you all from studying, the President said.

As of 17 October 2018, a total of 3,357 students have received scholarships in the form of savings, while the disbursement of scholarships for the remaining 1,787 students is expected in late October this year.

In addition to education assistance, Intan added that the Ministry also provides assistance to develop online education for universities in the province and the same assistance will also be provided for students affected by the quake and the tsunami in Palu, Donggala, and Sigi in Central Sulawesi province.

We hope the students will become excellent, tough graduates with characters and who care about socio-cultural and environmental issues, she concluded. (Bureau of Press, Media, and Information of Presidential Secretariat) (MUR/EP/YM/Naster).