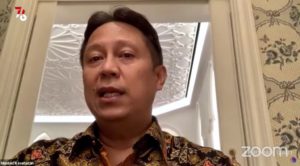 The Government has announced that it has inoculated 83 million doses of COVID-19 vaccine for the first and second shots as of Monday (16/8), according to Minister of Health Budi Gunadi Sadikin.

“Alhamdulillah, as of today we have administered 83 million doses in total. Indonesia placed the world’s 9th position among the countries with the highest rates of COVID-19 vaccination andwe might move to the 8th position today. This is an answer to any doubts,” the Minister said in a virtual press statement on the Implementation and Evaluation of Public Activity Restrictions (PPKM), Monday (16/8).

Previously, the vaccination took about 27 weeks starting from 13 January to 8 July to complete 50 million doses. Through the acceleration efforts, the Government is targeting vaccination coverage to reach 100 million doses by the end of this month.

“The President and Coordinating Minister urged to reach a 50 million vaccination target within 7 weeks. That way, we are striving to reach 100 million doses by the end of this month,” he said.

In line with the ongoing acceleration of vaccination, the Government also continues to speed up the fulfillment of the demand for the vaccine. If the number of vaccine doses reaches 90 million doses between January andJuly this year, there will be 70 million doses of vaccine this August.

“A total of 70 million doses of vaccine will arrive this month. Thus, we have to reach the target within one month instead of 7 months,” Budi said.

For the record, the Government has reached its 2 million daily vaccination target in August set by President Joko “Jokowi” Widodo. As many as 2.8 million people have been vaccinated on Friday (13/8). (DND/UN) (RIF/MUR)