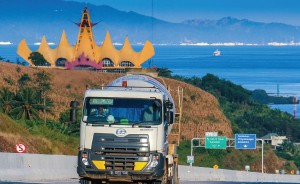 In a bid to improve the security, safety, and convenience aspects of this years mudik (annual exodus ahead of Eid Al-Fitr), Ministry of Public Works and Public Housing has prepared the 503-km Trans Sumatra Toll Road and the 1,000.7-km Trans Java Toll Road.

Minister of Public Works and Public Housing Basuki Hadimuljono in a Working Meeting with the House of Representatives Commission V, in Jakarta, Monday (21/5), stated that the Sumatera Toll road consists of a 281-km operational toll road and a 222-km functional toll road.

The utilization of the Trans Sumatera functional toll road will be controlled by the National Police Traffic Corps (Korlantas),” Basuki said.

“National road in the Jambi-Palembang border still needs to be repaired due to an auction process failure. For this reason, emergency response will be carried out to solve the potholes problems while the auction still in process,” he said.

According to the Minister, the Trans Java Toll road consists of a 996-km operational toll road and a 4.7-km toll road (Pandaan-Malang Toll section 4: Singosari-Pakis) while the section 1-3 of the Pandaan-Malang Toll road (31 km) is operational. He added that all toll roads and national roads in Java will be managed by the National Police Traffic Corps and that the Cikampek-Semarang route has a better condition this year.

For the record, the Ministry has also inaugurated the170-meter Colonel Sunandar bridge that connects Kudus-Demak. The bridge is located in the vital access to the North Coast of Java (Pantura) road in Central Java.

“The bridge really benefits the people. It is a two-directions bridge. In addition, two bridges in Temanggung (Galeh and Progo Bridges) are also ready to be opened to the public,” the Minister said.

A number of road repairs using rigid pavement in Java, he added, have also been completed and are ready to be opened during mudik session.

“The rigid pavement in Kebumen area as well as Prupuk, will be opened (to public) on Tuesday. So, we can ensure that all repairs will stop on D-10 of Eid al-Fitr,” Basuki concluded. (BKM Kementerian PUPR/ES)