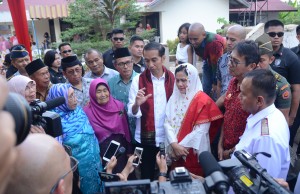 Family of national press figure the late Djamaludin Adinegoro represented by his granddaughter Eriswati Alamsyah expressed her familys plan to make the house of Adinegoro on Jalan Prof M Yamin in Sawahlunto, West Sumatera, as a museum.

I would like to thank Mr. President for his extraordinary attention to Adinegoro, Eriswati said.

For the building of the museum itself, Eriswati said, President Jokowi has already said that the Government is ready to lend assistance and hopes that the museum can bring benefits for educational purposes,  especially for the development of Indonesian press.

As previously reported, on the sidelines of his working visit in West Sumatera, President Jokowi and First Lady Ibu Iriana Widodo stopped by the house of Djamaludin Adinegoro on Thursday (8/2)

After giving a land certificate and talked with the family, President Jokowi and Ibu Iriana also made pilgrimage to the cemetery of national hero Prof Mohamad Yamin, located not far from Adinegoros house.  Mohd. Yamin himself was the older brother of Djamaludin Adinegoro. (AGG/JAY/ES) (EP/YM/Naster)