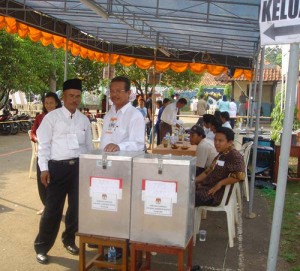 Despite a number of lingering issues in several regions, Minister of Home Affairs Tjahjo Kumolo ensured that on the whole, the upcoming regional elections set to be simultaneously held in 9 provinces, 24 regencies and 36 cities are ready to be held on 9 December this year.

In principle, the KPU (General Election Commission), the Panwas (Election Supervisory Committee), the Ministry of Home Affairs and all elements involved in the security affairs are ready to hold the elections that we hope will be smooth, successful and democratic, the Minister said to reporters after a plenary cabinet meeting at the Presidential Office in Jakarta on Monday (2/11).

Tjahjo also said that President Joko Jokowi Widodo had instructed related government institutions, especially BIN (the National Intelligence Agency), Kapolri (Chief of the National Police of the Republic of Indonesia), and the Ministry of Home Affairs to do early detection in a number of regions where conflicts could unexpectedly break out.

The Minister added that budget for the election was already sufficient despite a number of other considerations between Regional House of Representatives (DPRD) and the Election Supervisory Body (Bawaslu) considering that a number of regions are still having deficit regional budget. However, he added, for the time being, the issue could be handled at the provincial level.

The Minister went on to say that budget for the elections are taken from the regional budgets (APBD) amounting to Rp 7.1 trillion.

Tjahjo also conveyed matters discussed in a coordinating meeting, in which Coordinating Minister for Political, Legal, and Security Affairs told Minister of Home Affairs, Chief of the National Police’s Criminal Investigation Agency (Bareskrim), Chief of the National Police, and the Attorney General to issue a warning to mayors or regents who violate regional grant agreements regarding budget used to supervise and to hold the elections.

The Minister also conveyed an instruction from President Jokowi to pay a special attention to the final voter list (DPT).

We have also briefed the Public Order Agency (Satpol PP) and regional leaders at the subdistrict level. There must be a careful synergy between subdistrict heads, public figures, religious figures, traditional leaders, chief of precincts police (Kapolsek), and sub-district military commanders (Koramil) considering that the potentials of conflicts and vote manipulations happen at district level, the Minister said.

Tjahjo further said that starting Wednesday (4/10), a joint team from the Coordinating Ministry for Political, Legal and Security Affairs, the KPU and the Bawaslu would also begin monitoring several regions, especially 3 regions, TTU (Timor Tengah Utara in, NTT/East Nusa Tenggara), Blitar (in East Java), and Tasikmalaya (in West Java), where there are indications of possible conflicts at vote counting or election result announcement stage as several candidates (in those regions) are still allegedly on parole and manipulated registration from political parties.

This is what the President instructed to BIN, Kapolri, and the Ministry of Home Affairs to carefully oversee the elections to make it run smoothly and successfully, Tjahjo concluded.  (DID/ES) (EP/YM/Naster)