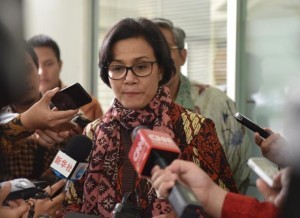 The Government announced that it would adjust this years State Budget following the change in the revenue target set in 2017 State Budget due to the surge in global crude oil and a poor projection for tax revenues.

In the 2017 State Budget, the Government targeted to generate Rp1.75 quadrillion (US$131.3 billion) in revenues, of which Rp1.5 quadrillion was expected to come from tax revenues.

There is a quite significant change in the State Budget from state revenues because price of global crude oil is now US$50 dollar per barrel. The assumption of global crude oil price at the 2017 State Budget is $45 dollar per barrel, said Indonesian Minister of Finance Sri Mulyani Indrawati to reporters after a limited cabinet meeting at the Presidential Office on Tuesday (30/5).

The tax revenues, the Minister said, would rise by only 13 percent, lower than 16 percent that was previously estimated. The revenues are not as high as the one estimated when we formulated the 2017 State Budget and the growth in tax revenues is based on the 2017 State Budget and the revenues in 2016. It was assumed that there would be a 16 percent growth. We estimate that the growth will be around only 13 percent, Sri Mulyani said.

With a 5.01 percent growth in the first quarter, we will need to have a higher growth of about 5.4 percent in the second, third, and fourth quarters. This will not be an easy challenge, the Minister said.

Nevertheless, Sri Mulyani estimated that Indonesias economy possibly will grow although the Government still has to be careful in the second and the third quarters.

On that occasion, the Minister said President Joko Jokowi Widodo instructed Ministries and State Institutions to cut once again the spending on goods, including for business trips and the like. The Minister estimated that there will be approximately Rp16 trillion that can be gained from the cut and the funds will be allocated to compensate the drop in tax revenues, estimated to reach Rp15 trillion.

Sri Mulyani added the Ministry is still formulating the revision of the State Budget, which is to be submitted to the House of Representatives (DPR) on June 5. (DNA/DNS/ES) (EP/YM/Naster)