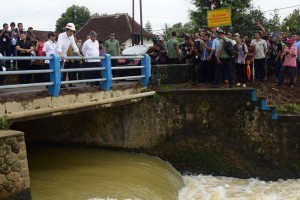 On the same day, the President inspected Lodoyo irrigation rehabilitation project and Kali Bogel flood control project in Blitar, East Java, before handed over land certificates to Blitar residents at the Pendopo of the office of Blitar Regent.

According to the President, Lodoyo primary irrigation was built in 1982 and no significant rehabilitation has been carried out ever since.

In the meantime, Minister of Public Works and Public Housing Basuki Hadimuljono reported that the three-million-hectare target of the irrigation rehabilitation project has been met, in accordance with the National Medium-Term Development Plan (RPJMN).

Accompanying the President during his visit to the Lodoyo project were Cabinet Secretary Pramono Anung, Minister of Public Works and Public Housing Basuki Hadimuljono, and Governor of East Java Soekarwo. (RFS/UN/RAH/OJI/ES)