Gov’t Rolls Out Policy to Improve Quality of School Operations 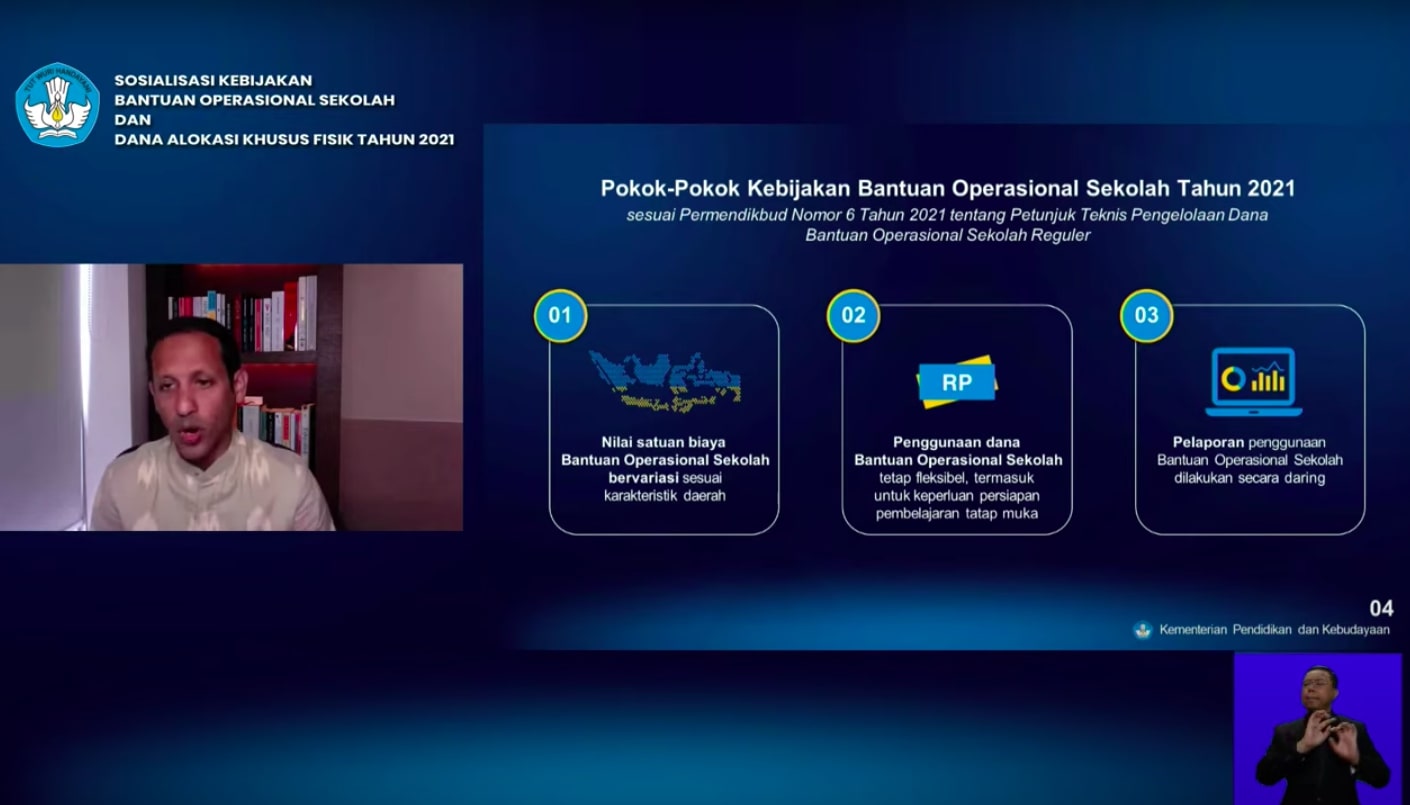 Ministry of Education and Culture announced Thursday (25/02) a policy regarding the distribution scheme for the 2021 School Operational Assistance (BOS) and the Physical Special Allocation Funds (DAK).

This policy is a continuation of last year’s Merdeka Belajar episode 3 supported by Ministry of Finance and Ministry of Home Affairs aimed at improving the quality of mechanism for channeling and using BOS funds directly to the school bank’s accounts.

“The BOS and Physical DAK policies are expected to bring a positive impact on regions, especially the 3T (frontier, outermost and disadvantaged) region because the affirmative budget policy mechanism is devised to meet the needs of each region,” said Minister of Education and Culture Nadiem Anwar Makarim during the dissemination of the 2021 BOS and the Physical DAK policies.

According to the Minister, the mechanism for the distribution of BOS funds directly to schools since last year has resulted in positive responses and succeeded in reducing delays in funds by around 32 percent or three weeks earlier than that in 2019.

“This (mechanism) helps heads of education units in managing their respective schools, especially in the early days of the pandemic. As many as 85.5 percent of school respondents and 96.1 percent of local government respondents argue that the distribution of BOS directly to school bank’s accounts is very convenient,” he said.

The Ministry, he further said, also continues to make efforts to transform the management of BOS funds through the issuance of Regulation of Minister of Education and Culture Number 6 of 2021 on Technical Guidelines for Regular BOS Fund Management.

Nadiem also underscored that the main points of the 2021 BOS fund policy are as follows: the value of the BOS unit costs varies according to the characteristics of each region, the use of BOS funds remains flexible, including for the preparation of Face-to-Face Learning (PTM), and the reporting on the use of BOS Funds is conducted online via https://bos.kemdikbud.go.id which serves as a prerequisite for distribution to improve accountability.

For the record, the Government also set aside a budget of Rp52.5 trillion in BOS funds this year for 216,662 education units for elementary, junior high, senior high / vocational schools and school for the disabled in Indonesia and starting this year, the unit value of school operational costs also varies between regions since it is calculated based on the construction cost index (IKK) and the student index (IPD) for each regency / city.

The provisions for the use of BOS funds for honoraria payment are not limited to the maximum allocation in a disaster emergency condition set by the Central Government and / or regional governments and the honoraria payment under normal conditions is a maximum of 50 percent for public and private schools, and honoraria can also be given to education personnel if funds are still available.

The Minister further said that the policy requiring reporting on the use of BOS as a disbursement requirement has resulted in accelerating and increasing the reporting rate with 70 percent and 99 percent of schools reporting the use of BOS phase I in last September and December, respectively.

Meanwhile, the 2021 Physical DAK allocation is Rp17.7 trillion for 31 thousand education units nationwide. The use of Physical DAK aims to ensure the completeness of educational infrastructure, contractual construction and rehabilitation to assist school principals to focus more on the learning process and not to be burdened by the administration of the goods and services procurement process, he added.

In 2020, the Ministry targeted as many schools as possible in need of rehabilitation with various categories of damage, while for this year the Ministry aims to ensure a complete and comprehensive repair of facilities and infrastructure according to the needs of each school. (Ministry of Education and Culture PR/UN) (MUR/EP)