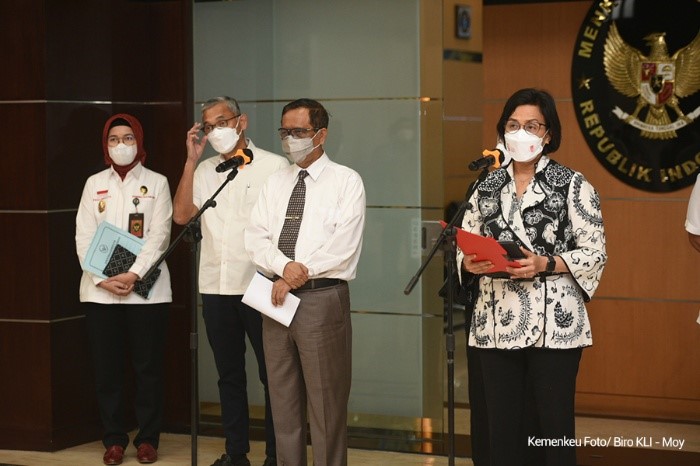 Photo by: Ministry of Finance PR

The Government through the Task Force for Handling State Collection Rights for the Bank Indonesia Liquidity Assistance (BLBI Task Force) continues to take actions in accordance with legal basis to restore state rights.

The statement was made by Minister of Finance Sri Mulyani Indrawati in the press conference on the BLBI Task Force in Jakarta, Tuesday (21/09).

In addition, Sri Mulyani said that she had collected BLBI funds debt to the former obligor of Bank Umum Nasional Kaharudin Ongko.

According to the Minister, the collection rights from Kaharudin Ongko has been submitted and managed by the State Receivables Affairs Committee (PUPN) since 2008. However, only tiny amount of debt has been paid.

Therefore, the Task Force has made coercive efforts through coercion letters and banning Ongko from traveling overseas. The Task Force has also seized part of collateral which includes current and fixed assets according to the Master Refinancing and Notes Issuance Agreement (MRNIA) which he signed on 18 December 1998.

“On 20 September, we seized and withdrew cash from him in the form of escrow accounts at one of the national private banks,” the Minister said.

The seized escrow accounts amounted to Rp664,974,593 and US$ 7,637,605, and the collected money was immediately transferred to the state coffers on the same day.

“I thank you because the team has received full support from the Attorney General’s Office and the National Police in the execution process. We also get support from State Intelligence Agency (BIN) and others in tracing and identifying the assets of obligors and debtors,” Sri Mulyani remarked. (Ministry of Finance/UN) (GWH/LW)