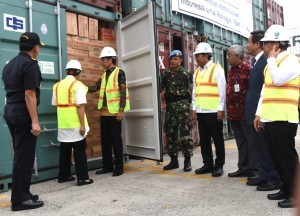 President Jokowi takes a look at containers filled with Indonesias humanitarian assistance for the Rohingya on Thursday (29/12), at the Dock III of Tanjung Priok Seaport, Jakarta

The assistance to be shipped via Dock III of Tanjung Priok Seaport consists of 10 containers filled with instant noodles, baby food such as wheat and cereal grains, as well as sarong. Those goods are what Myanmar has requested based on communications between Indonesian Foreign Minister Retno Marsudi and the Government of Myanmar, President Jokowi said in his remarks.

Previously on 6 December 2016, President Jokowi said that he ordered Minister of Foreign Affairs Retno Marsudi to meet Myanmar’s leader Aung San Suu Kyi to deliver four messages on the importance of opening the doors for humanitarian aid to reach Rakhine State, the need to immediately establish stability and peace in Rakhine State, and the need to protect and respect human rights, particularly for Muslim community.

I also echoed the same voice when meeting Kofi Annan in Bali, on 9 December 2016. And, once again Retno Marsudi reiterated it in the ASEAN Foreign Ministerial Retreat Meeting in Yangon, on 19 December 2016, the President added.

President Jokowi hopes Indonesias assistance will be well-accepted and taken as a form of concern for others, and that peace, stability, and harmony in Rakhine State will be established soon.