Govt Serious about Moving the Capital 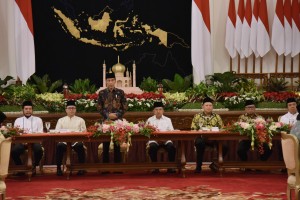 President Joko Jokowi Widodo stressed that the Government is serious about the plan to relocate the capital city and the Government even has discussed this issue internally since three years ago.

1.5 years ago, I ordered Ministry of National Development Planning (Bappenas) to conduct in-depth studies about moving the capital both in terms of the economy, the socio-political as well as the environmental side, said President Jokowi when delivering his remarks at Iftaar dinner with Heads of Government Institutions, at the State Palace, Jakarta, Monday (6/5).

The President went on saying that Java Island is currently inhabited by 149 million people or accounting for approximately 57 percent of the total population.

Whereas in other islands such as Sumatra, the President continued, the island is inhabited by 21 percent of total population, Kalimantan is only 6 percent, Sulawesi is only 7 percent, and Papua as well as Maluku are around 2-3 percent, respectively.

President Jokowi also underlined that other than over-populated issue of Jakarta, the city is also facing environmental problems such as floods, earthquakes, and tsunamis.

Moreover, Jakarta also lacks clean water supply. I think this will be a major issue if we do not resolve it immediately, the President said.

He then emphasized that the plan to move the capital is very urgent and needs to be decided soon, certainly after consulting with related institutions.

“We will later follow up the discussion related to this issue with state institutions both from the legal and political aspects,” the President further said.

As for the budget, Minister of Finance is ready to allocate the budget with long-term financing scheme.

We will design a special scheme so that the budget will not burden the state budget, President Jokowi said. (FID/OJI/ES)