Gov’t Set to Finalize Construction of Margatiga Dam in Lampung 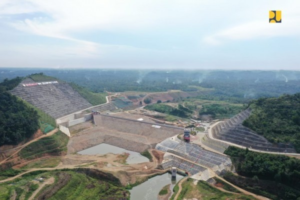 Ministry of Public Works and Public Housing has announced it will immediately finalize the construction of Margatita dam in Lampung province.

The construction is targeted to be completed by the end this year.

Ministry of Public Works and Public Housing has actively built dams to support national food and water sustainability. This year alone, the Government has set a target of building 17 dams throughout the country.

Aside from Margatiga dam in Lampung Province – which is one of national food estates – the Government has also completed the construction of Way Sekampung dam, which was inaugurated by President Joko Widodo on 2 September this year. The dam is located in East Lampung regency, Lampung province and is planned to be 28.75 meter high, 321.76 meter long, 7 meter wide, and 2,313.96 hectare water area.

“Margatiga Dam is multifunctional as it functions for irrigation system, water reserves, and flood controlling. As soon as the construction of the dam is completed, the local people will reap the benefits,” Jarot said.

The dam, which has been in construction since 20 December 2017, will be used to optimize the use water from Way Sekampung river, especially in downstream area. It has also been integrated with two other dams, namely Way Sekampung Dam and Batutegi Dam. The construction of the two dams was completed back in 2004. (PR of Ministry of Public Works and Public Housing/UN) (AW/EP)