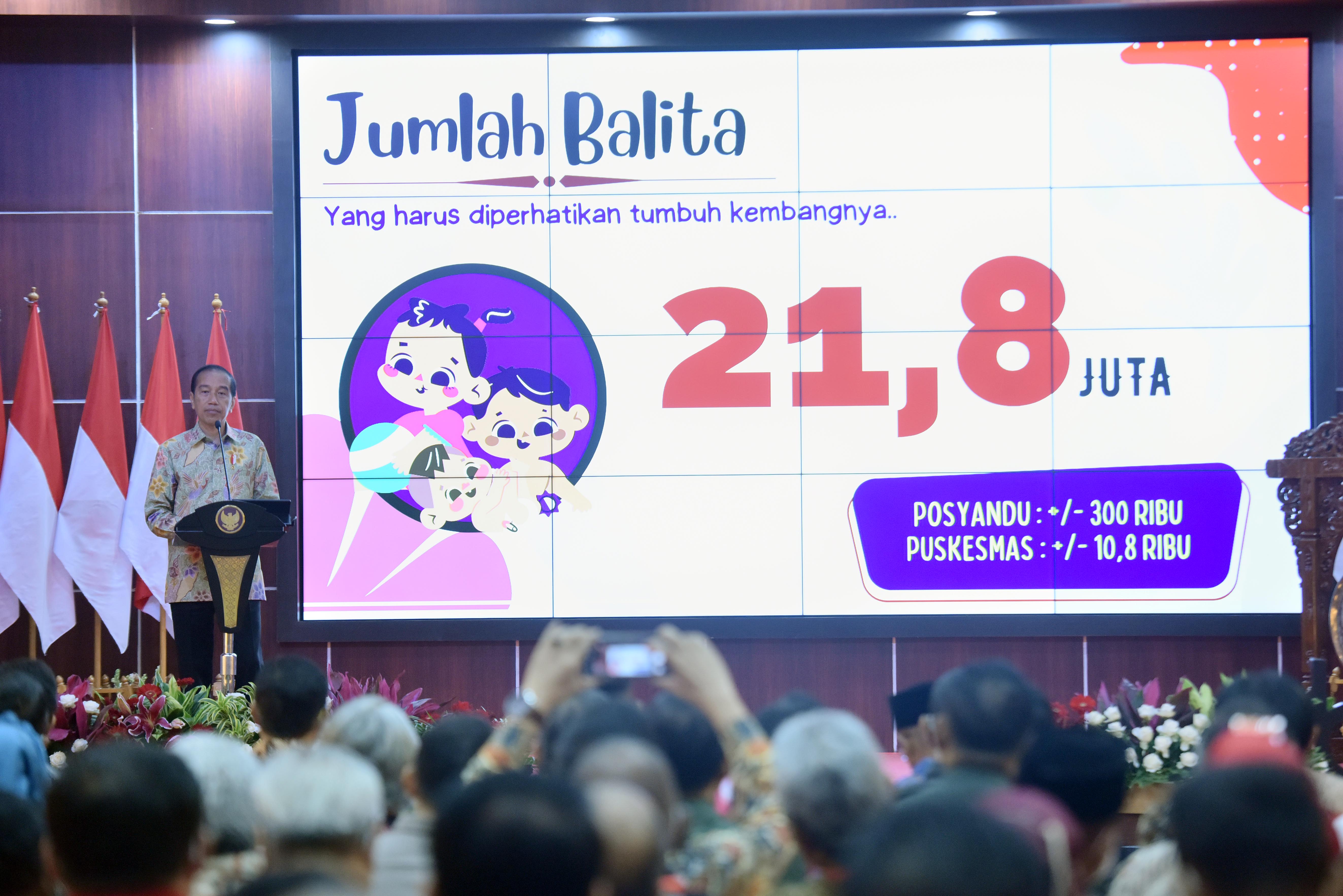 President Joko “Jokowi” Widodo has encouraged all elements to join forces in an effort to reduce stunting rate to fourteen percent by 2024.

“The target is fourteen percent in 2024. We must be able to achieve it. I am sure that through collaboration, that figure is possible to achieve as long as everyone works together,” said the President at the opening of the National Work Meeting (Rakernas) for the Family Development, Population and Family Planning Program (Banggakencana) and Stunting Reduction, Wednesday (01/25), at the Auditorium of the National Population and Family Planning Agency (BKKBN), Jakarta.

The President said that stunting is still a big problem that must be resolved immediately. According to him, stunting can affect the quality of human resources in a country, not only the physical condition but also the health and thinking abilities of children.

“The impact of stunting is not only in body height. The most dangerous threat is that it can affect the child’s ability to learn, mental retardation, and the emergence of chronic diseases that easily attack the child’s immune system,” he said.

Furthermore, the President requested that each region must have accurate and detailed data to ease the job of related stakeholders to monitor and provide care for stunting children. President Jokowi cited the example of Sumedang regency, which has successfully used digital technology through an electronic-based government system (SPBE) to accelerate stunting management.

“We should adopt similar program nationwide as soon as possible to achieve the target since the total number of children in the country is quite large around 21.8 million,” he said.

In addition, President Jokowi suggested that the private sector can be involved in efforts to reduce stunting in Indonesia. He cited an example of Kampar regency, which had succeeded in reducing the stunting rate by involving companies in the region.

“There are foster fathers from companies who help the stunted children to grow. The foster fathers are responsible to care for a number of children. That way, the stunting rate could drop drastically,” he added.

“From what I have seen in the field, Ministry of Health still provides biscuits for children. I know it’s easier to store and easier to pass during auction, while eggs and fish are relatively harder to store since it can easily spoil and damaged. But stop doing it. The babies and children must be given eggs or fish,” said the President.

Moreover, the President also underlined the importance of counseling and providing education to the public regarding food and nutrition for children.

Regarding a case that went viral few days ago—a woman gave her baby an instant coffee milk, President Jokowi urged that similar case should not happen again in the country.

“Once again, counseling is important. That case happened because the woman said that coffee milk was good for the baby since it contains milk,” said the President.

Closing his remarks, the President expressed appreciation to all elements for their hard work in reducing the stunting rate from 37 percent in 2014 to 21.6 percent in 2022. (FID/UN) (EST/MUR)