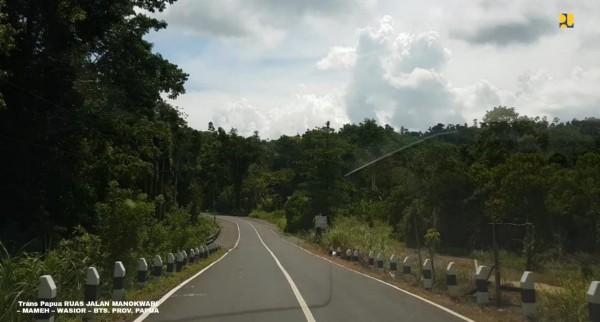 In a bid to reduce poverty rate, cost index, and to realize equitable infrastructure development in Indonesia, the Government continues to affirm its commitment to develop improved infrastructures in the provinces of Papua and West Papua.

For that reasons, Ministry of Public Works and Public Housing made some breakthroughs to build more integrated and targeted infrastructures that are synergized with ministries/institutions and regional governments.

“The measures are based on Presidential Instruction Number 9 of 2020 and directives of President Joko Widodo,” Minister of Public Works and Public Housing said on Friday (30/7).

Meanwhile, the budget allocated for West Papua Province is Rp3.75 trillion in which Rp543.27 billion to be used to develop water resources, Rp2.66 trillion for roads and bridges construction, Rp312.23 billion for settlement, and Rp228.83 billion for housing development. To date, the development progress has reached 44.09 percent.

The Minister said that efforts to open isolated regions and improve access and connectivity through land transport namely Trans-Papua road will improve the welfare of the Papuans.

In addition, the Ministry is also constructing 1,098-km roads at the border of Papua in which 931 km has been constructed and 756 km has been covered with asphalt. This year, the roads are extended by 34 km.

In order to support capacity building, the Ministry has constructed 179 schools, one university, and eight sports facilities in Papua and provided trainings on construction services with Papuan and West Papuan natives as the partners. It also prepared the construction of Youth Creative Hub in Jayapura, Papua Province to provide more opportunities for Papuan youth.

In addition, the Ministry also rehabilitated Wouma Market and 403 shop houses in Wamena to increase the economy of locals which had been affected by a conflict back in 2019. The Ministry also planned to build Thumburuni market in Fakfak, West Papua in August 2021. (MINISTRY OF PUBLIC WORKS AND PUBLIC HOUSING PR) (RAS/LW)