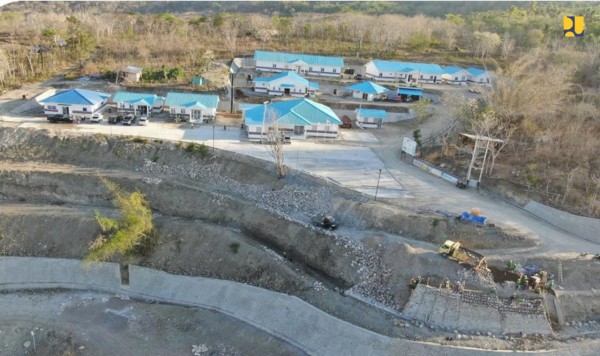 Ministry of Public Works and Public Housing is speeding up the construction of Manikin Dam which is projected to provide agricultural irrigation for communities in Kupang Regency, East Nusa Tenggara Province.

“The construction of the dam must also be followed by the construction of irrigation network. Thus, a dam that is built at a high cost can be beneficial because the water will certainly flow to the farmers’ rice fields,” Minister of Public Works and Public Housing said as quoted by webpage pu.go.id, Friday (12/02).

In the meantime, package 2 worth Rp 905.2 billion is carried out by contractors PT PP (Persero) Tbk, PT Ashfri Putralora, and PT Minarta Dutahutama (KSO) with a physical progress of 26.46 percent or 25.2 percent faster than the plan.

In addition to the main dam, the work currently being carried out is the completion of the 7.4-kilometer Tilong-Baumata access road and the main access to the 1.2-kilometer Baumata-Building Facility.

Administratively, the Manikin Dam is located in Kuaklalo Village in Taebenu District. The source of the dam’s water comes from the Manikin River with water area of 49.31 square kilometers. Manikin Dam is designed with Random Limestone Type with an vertical core which has a capacity of 28.20 million cubic meters and a normal inundation area of ​​148.7 hectares.

This dam is planned to provide agricultural irrigation for 310 hectares of land  in Kupang Regency, provide raw water source of 700 liters per second for Kupang City and Kupang Regency, and provide 0.125 megawatts of Microhydro Power Plant (PLTMH). The dam has other functions, including for flood control in the Manikin area with the capacity of 531.70 cubic meters per second, and for tourism area.

In addition to the Manikin Dam, four other dams have also been built in East Nusa Tenggara Province, namely Napun Dam in Sikka Regency, which construction progress currently has reached 98 percent, the Temef Dam in South Central Timor Regency, the Mbay Dam in Nagekeo Regency, and Welekis in Belu Regency.

During the COVID-19 pandemic, the dam construction work has not stopped to maintain economic sustainability, especially to provide jobs for contractors, consultants and construction workers. (PR of Ministry of Public Works and Public Housing /UN) (RI/MMB)