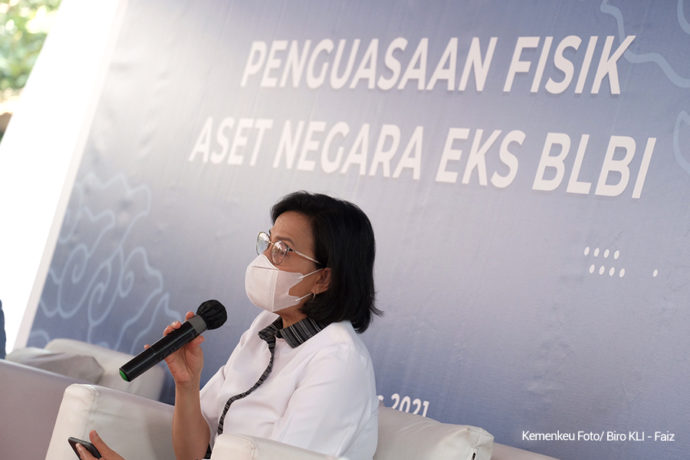 Minister of Finance Sri Mulyani. Photo by: PR of Ministry of Finance.

The Government has started to take over and control assets from the obligors and debtors of Bank Indonesia Liquidity Assistance (BLBI).

As part of the measures, the Government on Friday (27/08) has taken over 49 parcels of land covering a total area of 5,291,200 square meters located in Medan, Pekanbaru, Tangerang and Bogor.

“Today we take over several assets from the obligors (of the BLBI). The asset takeover is part of the compensation from the BLBI implemented 22 years ago. I am glad that the asset takeover is also carried out in several other cities,” Minister of Finance Sri Mulyani Indrawati said in Tangerang, Friday (27/08).

Sri said that the Government continues to regain its collection rights of the BLBI by deploying all related Government stakeholders. The owner of a bank or the debtor in a bank that has received loan from the Government must return the funds they received.

“We will exercise all state authorities to examine whether the debtor and obligor have assets in the name of the person concerned, be it in the forms of funds in the bank, a company, land, or other forms. This will continue to be pursued in a civil manner as payment for their obligations,” she said.

The Minister went on to say that the total amount of the existing BLBI liabilities is Rp 110.45 trillion. To that end, the BLBI Task Force has summoned 48 obligors and debtors with significant liabilities (higher than Rp 50 billion). In the event they fail to comply with the summons, after the third summons, their names will be disclosed to the public.

“I call on all obligors and debtors to comply with the summons and make settlement for your obligation that has not been fulfilled for 22 years. I will continue to order the Task Force to contact the obligors and their descendants,” the Minister said. (PR Ministry of Finance/UN) (RI/MUR)