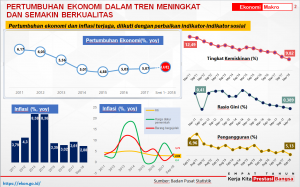 The Jokowi-JK leadership has managed to balance supply and demand sides, according to Coordinating Minister for the Economy Darmin Nasution.

Do you know the differences between two sides? Demand side is related to fiscal/monetary. While, supply side includes improved infrastructures and human resources, and also covers land sector, Darmin said during a press conference on the Report on Four Years of Jokowi-JK Administration, Improving Indonesias Human Capital to Become a Developed Country, at Auditorium of Ministry of State Secretariat, Building III, on Tuesday (23/10).

According to Darmin, a balanced supply and demand sides leads lead to an improved economy that will materialize in structural and economic transformations.

He added that shifting from traditional sector to formal sector usually inflicts a lot of problems that will appear when the Govenment has not paid enough attention to supply side, as well as infrastructure and human resources sectors. Once there is a balance, then we are ready to conduct economic transformation without having to shift all labors from agricultural sector to industrial sector.

In fact, we can transform agricultural system from subsistence to commercial agriculture because of the improved infrastructures that allow an easier distribution of agricultural products from rural areas to cities, Darmin said adding that economic transformation is a key to an advancement in economic sector.

On that occasion, Darmin also said that Indonesia has a healthy macro economy and strong fundamental even though there are also some challenges.

Our economy gradually grows amid global turmoil and economic slowdown. So this is an achievement for us, the Darmin said.

According to Darmin, unemployment rate is steadily declining in recent years to only 5.13 percent. The Government is also able to control inflation rate.

(Inflation rate) that is only 3.5 percent is still considered stable as we almost catch up with other countries  that are able to curb inflation, Darmin explained.

The Coordinating Minister also said that our fiscal performance is also improved compared to the last 2-3 years. Meanwhile, monetary performance has been solid, particularly in the real sector of the economy.