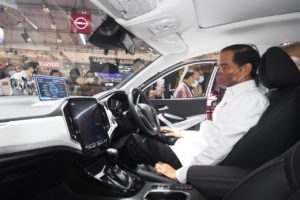 In a bid to establish an environmentally friendly and low emissions electric vehicle (EV) ecosystem in the country, the Indonesian Government continues to encourage various efforts to increase the production of electric and hybrid vehicles, President Joko “Jokowi” Widodo has said.

“We are also pushing for the production of electric vehicles, the production of hybrid vehicles, but again, all of them must be environmentally friendly,” the President said at the 2021 Gaikindo Indonesia International Auto Show (GIIAS) adopted the theme “Wheels to Move”, at Indonesia Convention Exhibition (ICE), BSD City, Tangerang regency, Banten province, Wednesday (17/11).

On the occasion, President Jokowi visited several booths from various automotive brands and tried some vehicles on display.

In addition, the President also met with a number of CEOs from car manufacturers present at the exhibition. “Earlier we meet with the CEOs and I told them our concern and what should we do together for the future,” he added.

After the visit, the President also tested drive one of the electric cars on display, namely the Mitsubishi Minicab Miev. (Presidential Secretariat/UN) (FI/MUR)