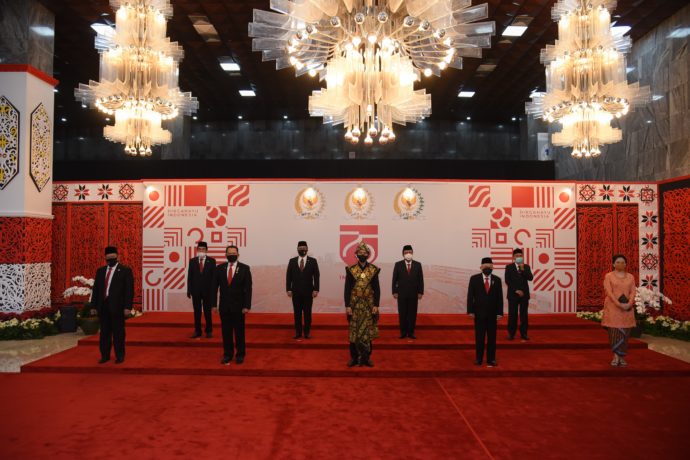 The President, the Vice President, Speakers and Vice Speakers of the MPR, the DPR and the DPD pose for a picture in Jakarta, Friday (14/8). Photo by: the House of Representatives (DPR).

In a bid to achieve energy autonomy, Indonesia has produced and used B20 fuel and has been able to reduce the oil imports since 2019, according to President Joko “Jokowi” Widodo.

The massive downstreaming of raw materials, the President added, is continuously undertaken. Coal is processed into methanol and gas, several refineries are being constructed to process crude oil into refined oil, and at the same time they become petrochemical industries that supply high values of products from downstream industry. “Nickel ore is processed into ferro nickel, stainless steel slab, and steel sheet and is developed as the main material for lithium batteries. This will narrow down our current account deficits, increase our employment opportunities, and start tackling fossil energy domination,” the President said.

The President added that the measures will place Indonesia in an even more strategic position in the development of lithium battery, world’s electric vehicle, and future technology producer. The same principal, the President added, must be adopted in building other industrial estates, including super economic corridor development in the northern coast of Java. “Batang Industrial Estate as well as the one in Subang-Majalengka is still being developed in this brief time, designed to attract quality investment that is in synergy with our MSMEs, providing additional significant values for the national economy, and creating employment in a big number,” the President stated.

The President went on to say that similar industrial estates will also be built in various regions all over Indonesia, in synergy with community entrepreneurship and MSMEs, to provide employment opportunities for unemployed young generation and boost equitability of development in all corners of the country.

“Consequently, a favorable national ecosystem for the expansion of quality employment opportunity must be established. Regulatory reforms must be carried out. Regulations that are overlapping, complicated, and misleading those that are at risk must be put to an end,” the President said, adding that all the measures are dedicated to fair national economy to the interests of workers and job seekers in order to alleviate poverty by providing quality employment opportunity as wide as possible.

On that occasion, the President also said that extraordinary measures have been taken in the struggle to curb the spread of COVID-19, in treating patients, and in preventing deaths. “On behalf of the people, the nation, and the state, I would like to express my gratitude and highest appreciation to doctors and nurses, and health workers at hospitals, laboratories, health clinics, and isolation rooms, as well as to community leaders, volunteers, journalists, personnel of the Indonesian National Defense Forces (TNI) and the Indonesian National Police (Polri) and civil servants at the Central Government and regional governments,” the President said.

The President further said that amid the pandemic, fundamental reforms in the health sector must be accelerated, while disease prevention and a healthy lifestyle must be the top priority. “We must also continue strengthening the capacity of our human resources, developing hospitals and health centers, as well as medicine and medical equipment industry. Resilience and capacity of our health service must be improved on a massive scale,” the President added.

Regarding food security, the President said that smooth food supply chain must be maintained from the upstream of production to the downstream of distribution to all regions across the country. Food production efficiency, increasing added value for farmers, strengthening of cooperatives and farmer corporation will continue to be improved.

“We are building food estates to strengthen national food reserves, not only in the upstream sector but also in the downstream sector of food product industry. We will no longer adopt manual ways, but will adopt modern technology and the use of digital sophistication, not only for domestic market, but also international market,” the President said.

The President further said that the Government has started to develop food estates in Central Kalimantan and North Sumatera Provinces, and will continue to develop it in some other regions. “It is a synergy between the Government, private sector, and the community as land owners and as workers,” the President said. (MAY/TGH/EN)