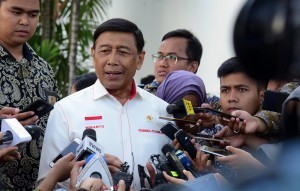 Ahead of Presidential-Vice Presidential and Legislative Elections in April this year, Coordinating Minister for Political, Legal and Security Affairs Wiranto said that the Government, together with the General Election Supervisory Board (Bawaslu) and the Indonesian National Police (Polri), already conducted an analysis on areas / regions with the highest level of vulnerability to conflict called Election Vulnerability Index.

After we identified, we can gradually make efforts to handle those areas so that the index value can be reduced, Wiranto explained after attending a Plenary Cabinet Meeting, at the State Palace, Jakarta, Monday (7/1).

He added that these measures are taken to reduce possible threats during the elections.

So we do not need to worry for any possible conflicts, Wiranto told the reporters.

The Government expressed hope that the five-yearly elections should make people excited because they get the opportunity to choose leaders based on their preferences.

Furthermore, Wiranto reminded, all stakeholders involved in the election, including ministers, head of institutions, the General Election Commission (KPU), General Election Supervisory Board (Bawaslu), the Honorary Council Election (DKPP), the community as well as the political party leaders have shared responsibility to realize peaceful and safe elections.

Second, the Government will prevent any security disturbances, such as terrorism and radicalism.

Third, the Government urged the public not to use identity politics since it can divide the nations unity.

Wiranto also asked political parties, as one of those responsible for the success of the election, to maintain a peaceful campaign. (DNA / JAY / ES)