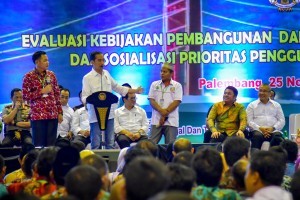 The Indonesian Government has taken various steps to boost the price of palm oil and rubber which significantly drops and in the last four years, the Government has been sending teams to the European Union and several countries to solve the matter, according to President Joko “Jokowi” Widodo.

“This is actually a matter of business; they are selling sunflower oil, we are selling palm oil, so they limit (the import of palm oil)” President Jokowi said during the Evaluation of Village Community Development and Empowerment Policy and Dissemination of Village Funds Allocation Priorities in Palembang, Sunday (25/11).

The President went on to say that Indonesia has the largest palm oil plantation in the world, with 13 million hectares of plantation in Sumatra, Kalimantan, Papua, and Java, and 42 million tons production every year.

“Imagine 42 million tons, a very huge number. We are currently competing with Malaysia and Thailand, but we are still the largest (producing country of palm oil) ,” President Jokowi said, adding that controlling the price of palm oil is not easy, because the price depends on international trade.

President Jokowi further said that since three months ago the Government has decided to allocate
the excess supply of palm oil as a component of Biodiesel (B) 20. According to the President, the use of B-20 will increase the price of palm oil by increasing the demand.

Regarding the price of rubber, President Jokowi said that the Government policy cannot intervene the global market.

The President said that he has instructed Minister of Public Works and Public Housing Basuki Hadimuljono to buy rubber from cooperatives or farmers and use the rubber as a mixture for paving roads. The purchasing price will be approximately Rp7,500-Rp8,000.

According to the President, it is not easy to solve the problem since it involves very large production but the Government will do the best effort to solve it anyway.

“We have sent our team to the European Union, China, and India, all of them are the biggest importers of Indonesian palm oil,” President Jokowi concluded.