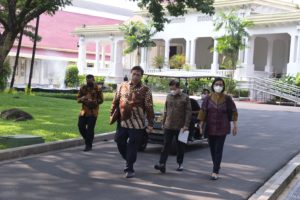 “On economic growth, we have agreed, reported to the President, that the range is between 5.3 and 5.9 percent,” Airlangga said in his press statement.

Airlangga pointed out that on the expenditure side, the sectors that are targeted with the most growth include consumption and investment, with approximately 5 and 6 percent or at the same level as the pre-pandemic target, as well as export with 6-7 percent in line with industry downstreaming and global demand increase.

Meanwhile, on the supply side, the Government will rely on processing industry sector, trade sector, information and communication sector, accommodation and food supply sector, and agriculture sector.

“It is a challenge to return the growth of processing industry sector above the economic growth, namely 5.3-5.8 percent,” he said, adding that the economic growth target was set based on several considerations, including uncertainties related to COVID-19 pandemic, global inflation in several countries, and monetary policy normalization (interest rate increase).

“In 2023, economic growth is forecast to be lower than in 2022, so new sources of financing are needed for economic growth,” he said, adding that during the Cabinet Meeting, the agreed fiscal deficit is below 3 percent gross domestic product (GDP) in accordance with Law Number 2 of 2020.

“Banking credit increase is important and one of [the ways to do it] is by issuing Regulation of Financial Services Authority on credit relaxation, hopefully without time limit. There also needs to be a decrease in bank reserves because we saw that the potential is still high compared to the credit in banking. The current realization is a little over 5 percent compared to third party funding at 12 percent. There is still a big room,” he said.

Investment increase, including foreign and domestic investments, is the second reform.

“Foreign and domestic investments in 2023 is pushed to level Rp1,800-1,900 trillion, so improvement of competitiveness and OSS are important,” Airlangga said, adding that the third reform is domestic inflation control, which poses as a future challenge and must continue to be focused on so that the inflation remains under control.

“In 2023, the scheme of BI’s role is expected to be returned so that it can control secondary market, especially state securities. Banks who will give credits certainly must switch assets, which means they must release state securities,” Airlangga said.

The fifth reform is tax ratio in crease with tax base increase, supported with acceleration of tax reform administration, and the sixth and final reform is budget reserve.

“Like what we are currently facing, we certainly need budget for—if there are new COVID-19 variants, we still have budget at the ready,” he remarked. (DND/UN) (DH/MMB)