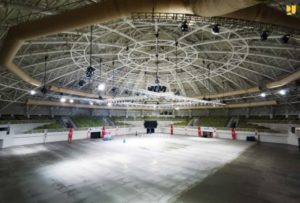 One of the venues of the 20th National Games in Papua (Photo by: PR of Ministry of Public Works and Public Housing)

In a bid to prevent a spike in COVID-19 cases following the 20th National Games (PON), the Government has announced it will tighten the return procedures for athletes, coaches, and officials.

Coordinating Minister for Economic Affairs Airlangga Hartarto, who helms the Committee for COVID-19 Handling and National Economic Recovery (KPCPEN) asked Minister of Health, Minister of Transportation, Minister of Youth and Sports, and Head of COVID-19 Task Force to continue to carry out duties and supervise PON participants who are still in Papua until D+5 after the PON closing ceremony on 15 October 2021.

“Minister of Health should assign teams to continue to monitor athletes who are still in Papua and to care for athletes who are exposed to COVID-19. They must first be isolated in Papua and be tested until the 5th day. This will apply until D+5 after the closing ceremony of the PON, including in centralized isolation ships in Papua. Minister of Transportation should continue to assign teams until D+5,” Airlangga said virtually at the Coordination Meeting for Monitoring and Evaluation of the Implementation of the 20th National Games, Sunday (10/10).

The procedures are contained in the addendum to the Circular of Head of the COVID-19 Task Force. According to the procedures, the athletes, coaches, and officials must carry out a PCR test before their departure from Papua to their respective regions. They should also carry out another PCR test upon arrival at the airport in their regions.

Afterward, they must also self-quarantine for five days at locations prepared by their respective regional governments. In a case where the regional government does not provide the facilities, the Central COVID-19 Task Force will work with the Regional COVID-19 Task Force and Regional Sports Council to prepare the centralized isolation facilities.

Furthermore, the Chairperson of KPCPEN underscored that Minister of Youth and Sports, Head of COVID-19 Task Force, the Indonesian National Defense Forces (TNI)/the National Police (Polri) Operation Assistants, and the  General Chairperson of the Indonesian National Sport Committee (KONI) as the Supervisory and Steering Committee should continue to monitor the implementation of health protocols strictly for the remaining PON matches, especially for matches with a potential crowd of spectators or supporters, such as football, basketball, boxing, and volleyball.