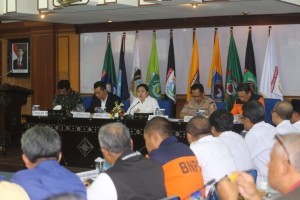 The Indonesian Government is committed to accelerating Lombok post-quake reconstruction, particularly in terms of rebuilding houses for the quake victims, according to Coordinating Minister for Human Development and Culture Puan Maharani.

“However, we must also uphold the accountability,” the Minister said during a dialogue with community members, facilitators, and applicators in Pengempel, Mataram, Wednesday (10/17).

Puan Maharani added that the house repair and reconstruction process shall be accelerated by simplifying disbursement requirements without neglecting accountability, in accordance with the instruction of the President in last Plenary Cabinet Meeting.

The acceleration, according to the Minister, will be carried out by simplifying the form containing 17 requirements in one sheet.

The Government, Puan continued, will also accelerate the establishment of Community Groups (Pokmas). For the first period, the disbursement can be done with one page of statement/recommendation providing the data of the recipients which is signed by Regent /Mayor, the Decree on the formation of Pokmas signed by Head of Village, and the authorization letter for the Pokmas to withdraw the money from individual account.

“Alhamdulillah (praise be to Allah), there are now 472 Pokmas and approximately 400 of them (in seven Municipalities/Cities) can be verified and are ready to receive the funds,” Puan Maharani said.

Regarding the availability of the funds, the Minister confirmed that the money is already available in the Pokmas account.

Puan Maharani went on to say that one of the requirements for accountability is that the beneficiary of the funds shall be the right person based on the data verification authorized by Regent/Mayor.

The simplification of disbursement requirements, according to the Minister, must be followed by a better capacity for housing development, supported by the applicators, facilitators, community facilitators, and local entrepreneurs.

“Of course it should be enough building material to rebuild thousands of the damaged houses,” Puan Maharani concluded.