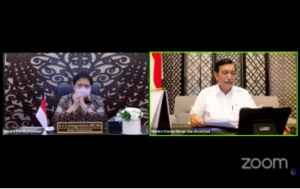 In a bid to prepare for the upcoming 20th National Sports Week (PON) in Papua Province on 2-15 October, the Government will accelerate vaccination drive in the host regencies/city.

“Based on the data I have received, the first administration of dose of vaccine in Jayapura City has reached 51 percent, Jayapura Regency of 48.39 percent, Mimika of 50.60 percent, Merauke of 55.58 percent, and Keerom of 33.73 percent,” Coordinating Minister for Economic Affairs Airlangga Hartarto said in a press statement on the latest developments of Public Activity Restrictions (PPKM), Monday (06/09).

In addition, President Joko “Jokowi” Widodo also ordered his Cabinet to intensify vaccination in a number of provinces with vaccination coverage that are still lower than national average rate.

On the occasion, Airlangga stated the Government would conduct trials of the use of PeduliLindungi app in cities/regencies which had achieved 50 percent of the first dose of vaccine, namely Banda Aceh City (58.47 percent), Jambi City (65 percent), Kupang City (61 percent), Palangkaraya (58 percent), and Batam (83 percent).

“PeduliLindungi will be used for check-in venues in several activities, such as malls or public facilities,” he added.

Airlangga also expressed hope to all elements of the nation for their support and cooperation to achieve 208.2 million vaccinations by December this year.

“The target can be achieved with good coordination from the Central Government, regional governments, governors and the Regional Leaders Communication Forum (forkopimda), regents, mayors, as well as the COVID-19 Task Force and the Indonesian National Defense Forces (TNI) and Indonesian National Police (Polri). We also appreciate public willingness to get vaccinated and follow health protocols,” he remarked. (FID/AIT/UN) (GWH/MUR)