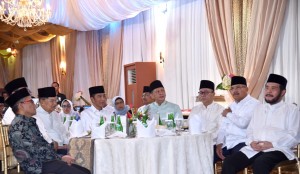 President Jokowi, accompanied by Vice President and Head of Government Institutions, attends ifthar at the official residence of Speaker of the House of Representatives, Jakarta, Monday (13/5). (Photo by: Presidential Secretariat)

The Indonesian Government is set to announce members of selection committee for the Corruption Eradication Commission (KPK) Commissioners this week.

“(The list) is still on a discussion. We hope (the final list) will be signed by this week,” President Joko “Jokowi” Widodo told reporters after ifthar at the official residence of the Speaker of House of Representatives Bambang Soesatyo, Jakarta, Monday (13/5).

The President also said that the Government is assessing the candidates one by one, adding that the committee will consist of people from various backgrounds.

“They are academics, practitioners, government officials, and NGOs representatives,” he said, adding that the formation of KPK selection committee needs to be done immediately considering the end of the KPK Commissioners’ term at the end of the year.

The new KPK Commissioners are expected to be selected no later than the end of the year. (BPMI Setpres/ES)